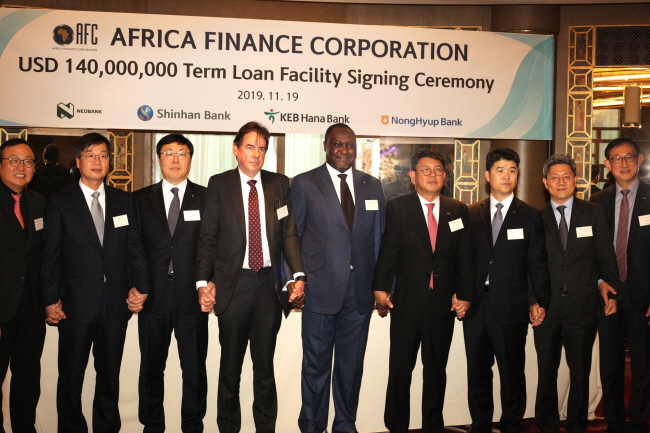 The Facility is AFC’s first Korean-focused loan facility and an important step as it builds a broad coalition of international investors to diversify its funding sources and allow institutions from around the globe to participate in Africa’s development. This Facility follows a successful US$233 million and JPY1 billion dual currency Samurai Term Loan Facility closed in early September 2019 and US$300 million Loan Facility through the Export-Import Bank of China.

Proceeds from the Kimchi Term Loan Facility will be used for general corporate purposes in accordance with AFC’s Establishment Agreement and the Charter.

Samaila Zubairu, President & CEO of AFC, commented: “We are delighted to announce this Kimchi Term Loan Facility, which is testament to AFC’s strong fundamentals and ability to diversify our funding sources as we build a coalition of investors to support our mandate of providing solutions to Africa’s infrastructure deficit. This also signifies the start of a great partnership with Shinhan Bank and the continuation of our relationship with Nedbank Limited, both ardent supporters of AFC and, indeed, Africa’s sustainable development. The Kimchi Facility augments the significant interest we have received to date from Asia, including a dual currency Samurai Term Loan Facility, a Loan Facility secured from the Export-Import Bank of China, and being the first African investment grade financial institution to be accredited by the Korea-based Green Climate Fund. There is clearly heightened market interest in African infrastructure, with investors realising the great potential that exists across the continent.”

Banji Fehintola, Senior Director & Treasurer of AFC, said: “At AFC, we constantly seek to diversify our sources of funding and Korea is certainly a very key market for us. It is this type of innovative finance that will enable us to continue mobilising global capital to execute projects and transform the lives of people in Africa. We are very proud of the success of this transaction and what we have achieved in Asia, and we look forward to deepening and broadening our partnerships over time.”

Mr Seung Hyeon Seo, General Manager of Shinhan Bank, London, added: “I am delighted to announce that AFC’s syndication has provided another milestone for Shinhan Bank as we engage in a dedicated business relationship in the African continent. We will continue to build up a sustainable business model within Africa as well as the EMEA region, as we look to lead and support Korean investors to the African Market.”

Kevin Ryder, UK Country Head for Nedbank, also commented on the Facility: “Nedbank is deeply committed to Africa and its economic development. We see the ability to connect international investors to the African market and vice versa as a core function and a key strength. This inaugural ‘Kimchi’ loan for AFC is a prime example of how we leverage our loan syndication and distribution capabilities to enable a key client such as AFC to further diversify its investor base. We are grateful to Shinhan Bank for choosing us as their African partner for this transaction.”

The Facility launched into general syndication 16 September 2019 and the loan agreement was finalised 11 November 2019.

The signing ceremony, which took place in London on Tuesday, 19 November 2019, was attended by the Lenders and representatives of AFC, [Shinhan Life, Embassy of the Republic of Korea, FSS London Representative Office, Bank of Korea, Mirae Asset Daewoo].

Notes to Editors
About AFC – www.africafc.org

AFC, an investment grade multilateral finance institution, was established in 2007 with an equity capital base of US$1 billion, to be the catalyst for private sector-led infrastructure investment across Africa. With a current balance sheet of approximately US$5.6 billion,
AFC is the second highest investment grade rated multilateral financial institution in Africa with an A3/P2 (Stable outlook) rating from Moody’s Investors Service. AFC successfully raised US$650 million in 2019, US$500 million in 2017 and US$750 million in 2015 through Eurobond issuances; out of its Board-approved US$3 billion Global Medium-Term Note (MTN) Programme. All Eurobond issues were oversubscribed and attracted investors from Asia, Europe and the USA.

About Shinhan Bank
Shinhan Bank is the leading bank in Korea with total employees of 17,801, offices around 20 countries. Shinhan Bank, which has been setting a new standard with constant challenges and innovations in Korea’s banking industry, and Cho Heung Bank, a long-standing industry leader in Korea, became one on April 1,2006 and integrated Shinhan Bank was launched under the motto of “Financial Pride Of Korea, THE BANK, Shinhan”. As of end of June 2007, Shinhan Bank now stands as an undisputed, financially sound industry leader with 198.6996 trillion won in total assets, 10.76 trillion won in shareholders’ equity, 1,038 branches and 15 million customers.

To offer a comprehensive range of financial services effectively, Shinhan segments our customers into 7 groups(Retail, PB, WM, SMEs,(Large)Corporate, IB segments) and pursue specialized business models. To satisfy customers’ financial needs with the top-class financial expertise, we have built and are operating an optimized channel network. Even amid the rapidly changing financial environment, Shinhan Bank maintains its leadership in asset quality and risk management while trying to develop new growth engines based on strong organizational culture and increase efficiency/ competitiveness through innovation activities. The Bank is playing a central role in creating the Group synergy based on its market leadership in core areas and strengthening global business in key regions. It is also committed to practicing sustainable management with its pursuit of CSR activities.

By providing customers with the best value, earning the deep trust from shareholders, offering a respected workplace for employees and fulfilling the mission as a corporate citizen that belongs to the society and the nation, Shinhan Bank aspires to become a No. 1 Bank that takes a lead not just in Korea but also in Asia and something to be proud of in the minds of customers and to the nation

Nedbank is one of the four largest banks in the Republic of South Africa, tracing its roots back to 1831 with the establishment of the Cape of Good Hope Savings Bank. Following a succession of branding and structural changes, Nedbank Group in its present form was established in 2003 with the acquisition of the Board of Executors (BoE). Nedbank is engaged in a wide spectrum of banking through its Corporate and Investment Banking franchise, as well as Retail and Business Banking, Wealth Management and Rest of Africa businesses. With its head office in Johannesburg, the Group has a far-reaching presence across Africa, with the Ecobank-Nedbank alliance providing it with a footprint in 39 countries and creating the largest banking network in Africa.

While Nedbank’s primary market is Africa, the Nedbank Group provides services to international clients through its presence in the Isle of Man, Guernsey, Jersey, London and Dubai. Nedbank has a vast presence through its 702 branches and outlets located in South Africa and the rest of Africa.

Additional information about Nedbank may found on its website: https://www.nedbank.co.za/content/nedbank/desktop/gt/en/investor-relations.html