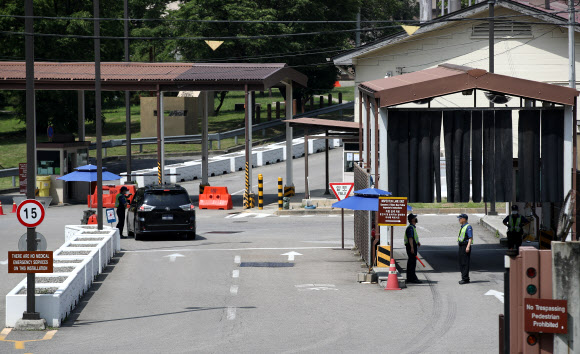 Seen in this photo taken June 3, 2020, is a gate of the U.S. Forces Korea’s Yongsan Garrison in Seoul. (Yonhap)

More than 4,000 South Korean workers had been on the furlough since April 1, as Seoul and Washington failed to reach an agreement on a new Special Measures Agreement (SMA) that stipulates how much Seoul will pay for the upkeep of the 28,500-strong USFK.

But the furlough was to end as the U.S. defense department accepted South Korea’s proposal earlier this month to fund the labor costs for all USFK Korean workers through the end of this year.

“All the employees returned to work today as planned. It is expected to bring many things back to normal,” a USFK official said.

The labor union welcomed its members back and expressed gratitude to the South Korean and U.S. governments for their agreement to end the furlough.

“We’ve all gone through a hard time. Now we again became one single complete entity,” a union member said. “We will continue to strive to prevent a recurrence.”

Officials said Washington has asked Seoul to pay $1.3 billion per year, a nearly 50 percent increase from last year, while Seoul says its best offer stands at a 13 percent increase.

After the previous SMA expired at the end of last year, Seoul proposed that the two sides first settle the salary issue and then work toward a broader cost-sharing agreement.

In April, South Korea also delivered its intention to pay the workers first and then deduct the amount from whatever financial contribution it agrees to make under a new SMA.

Washington had objected to the idea, saying it would detract from a comprehensive deal, but changed its course apparently due to growing financial burdens on USFK and impacts of the absence of around half of the local workforce on its readiness posture.

“The two countries are working on a separate arrangement on this wage issue,” a Seoul official said. “Efforts to clinch a fair SMA are also under way.”