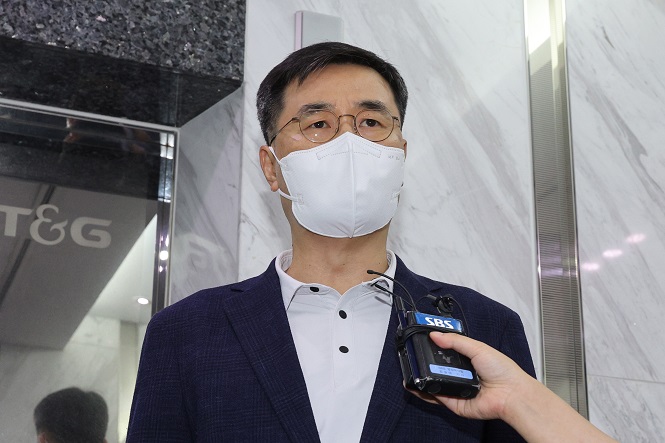 This Aug. 27, 2022, file photo shows Jeon Ik-soo appearing before the office of independent counsel Ahn Mi-young in Seoul to face questioning over the military’s handling of a sexual assault case that led to the death of MSgt. Lee Ye-ram in May 2021. (Yonhap)

SEOUL, Nov. 26 (Korea Bizwire) — An Air Force brigadier general has been demoted by one rank to colonel for mishandling a sexual assault case that led to the suicide death of a female soldier, military sources said Saturday.

Jeon Ik-soo, the chief legal affairs officer of the Air Force, became the first general officer to be reduced in rank in about 40 years.

The defense ministry passed the rare disciplinary measure on Nov. 18 and President Yoon Suk-yeol approved it Tuesday, they said.

Jeon was among several Air Force officers indicted in September in connection with the suicide death of a sexually abused female noncommissioned officer.

The woman, Lee Ye-ram, took her own life in May 2021, two months after she filed a complaint of being molested by a male superior of the same rank.

An independent counsel indicted the officers for attempting to cover up the sexual assault case and defaming the victim.

Jeon, chief of the Air Force legal affairs office, was charged with trying to inappropriately influence the initial probe into the incident.

He has been suspended from duty and is scheduled to retire next month.

The demotion took effect immediately though he can appeal within 30 days of notification, according to the sources.

It is the first demotion of a general officer since 1979, when then Army Chief of Staff Gen. Jeong Seung-hwa was bumped down to private following a military coup led by Chun Doo-hwan, who later became president.

The father of Lee, Lee Ju-wan, said Jeon must be demoted to prevent what his daughter suffered from happening again.

“It is not private revenge or the destruction of anyone but what the Ministry of National Defense had to decide to prevent what Ye-ram went through from happening again,” the father told Yonhap News Agency by telephone.

Lee said, “There should be no more young soldiers dying of these things.”