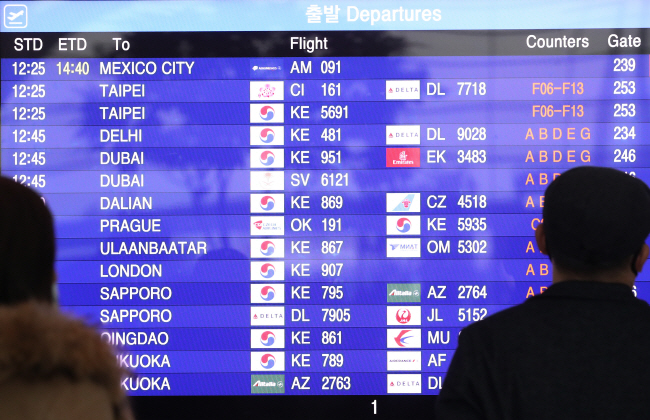 SEOUL, Feb. 5 (Korea Bizwire) — The spread of the novel coronavirus is likely to take a particularly heavy toll on air carriers among all South Korean industries, analysts said Wednesday, citing the reduction in the number of flights to China.

“The new coronavirus will add another blow to the already-downtrodden travel demand,” Eugene Investment & Securities Co. said in its report on the impact of coronavirus on South Korean industries.

“There’s a high possibility that efforts to move the suspended China flights to other routes will cause oversupply,” it added.

As of Tuesday, Korean Air Lines Co. and seven other carriers have temporarily suspended 57 out of their 100 routes to China due to the coronavirus scare.

The China flights account for about 12 percent of Korean Air’s revenue and some 17 percent of Asiana Airlines’ sales, according to the air carriers’ data.

Eugene Securities analyst Bang Min-jin said a recovery in air travel demand would take a long time even if the coronavirus is contained.

“In the SARS case, the number of travelers dipped only 1.6 percent on-year, yet its impact lingered for another two to three years,” Bang said, referring to the severe acute respiratory syndrome (SARS).

Bang said that the air carriers are facing worse economic conditions than in 2003 and 2015 when South Korea was hit by the SARS and the Middle East Respiratory Syndrome (MERS), respectively.

The number of travelers here grew 10.7 percent in 2015 despite the MERS fears, Bank of Korea data showed, buoyed by the 7-percent growth in household disposable outcome and the heated competition of low-cost carriers that year.

In the July-September period in 2019, household disposable income rose 1.5 percent from a year earlier, according to data provided by Statistics Korea.