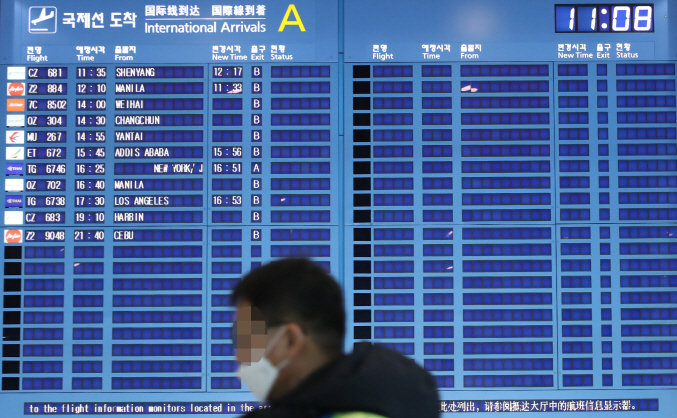 An electronic signboard at the departure lobby of Incheon airport, west of Seoul, shows there are no outbound flights scheduled for March 17, 2020. (Yonhap)

Korean Air Lines Co., the country’s biggest airline and national flag carrier, said Thursday it will begin reducing the number of flights to three per week from seven on the Incheon-Paris route.

The latest move comes as European countries close their borders and restrict movement in an effort to slow the spread of COVID-19.

Korean Air has already suspended 10 out of 12 European routes, with flights on the Incheon-London route being reduced to three from five early this month.

The two full-service carriers have halted services on most of their international routes as more than 150 countries and territories were imposing entry restrictions against visitors from South Korea as of Thursday.

Local airlines have been struggling with a sharp decline in air travel demand since Jan. 20, when South Korea reported its first case of COVID-19. 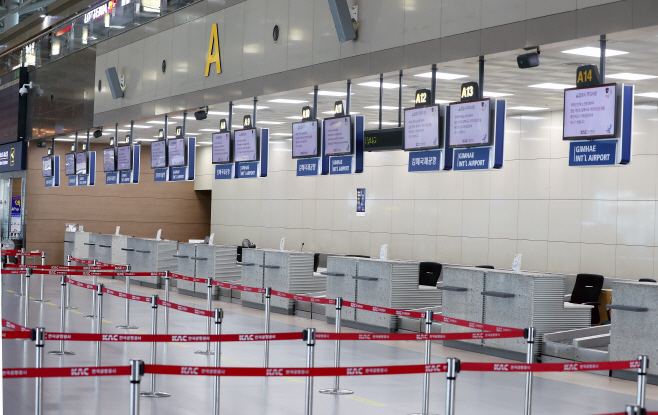 The departure lobby of Gimhae airport in the southeastern port city of Busan is deserted on March 16, 2020. (Yonhap)

Adding to the woes of the airlines, Japan on March 9 adopted a temporary 14-day self-quarantine period for people flying in from South Korea and China, and asked them to refrain from using public transport.

The move prompted Korean Air to suspend 16 of its flights on 17 routes, except for the Incheon-Narita route, to Japan starting March 9.

Asiana suspended all of its flights to Japan for the March 9-31 period due to Japan’s entry restrictions. It previously operated 11 routes to eight Japanese cities.

As of Thursday, South Korea reported 8,565 confirmed cases of the novel coronavirus and 91 deaths.

Jeju Air Co., the country’s largest low-cost carrier, said it will continue to serve two routes from Incheon to Tokyo and Osaka. Thirteen out of its 15 routes to Japan are no longer in service.

Six other budget carriers — Jin Air, Air Busan, Air Seoul, Eastar Jet, T’way and Fly Gangwon — have already suspended all or most of their flights on international routes. Most of them have entered an emergency management system to stay afloat.

The seven budget carriers suspended all of their flights to Japan on March 9.