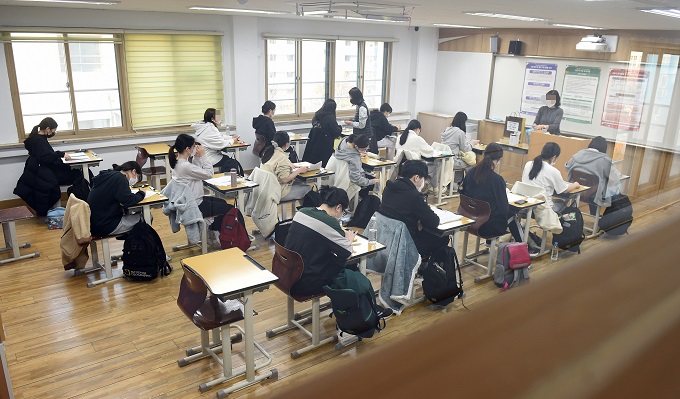 Students wait at a high school in Seoul on Nov. 17, 2022, to take the state-administered College Scholastic Ability Test. (Yonhap)

The Ministry of Land, Infrastructure and Transport has banned all airplane takeoffs and landings for 40 minutes from 1:05 p.m. to ensure that no noise disturbs the English listening test.

Aircraft in flight had to circle at an altitude of at least 3,000 meters during this time.

Jeju Air Flight 7C113 from Gimpo and Busan Air Flight BX8045 from Gimpo circled around the northern coast of Jeju Island as they waited for the listening portion of the test to end.

No airplane departed during this time.

With the end of the listening proficiency exam, all aircraft were directed to land at Jeju’s airport.

Aircraft on standby at Jeju Airport also began to depart.

Government officials said a total of 24 domestic flights from or to Jeju International Airport had their schedules changed for the examination.