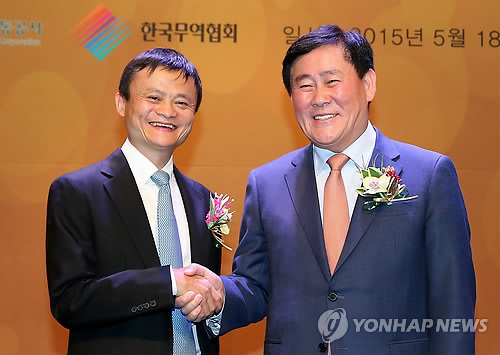 The launch of the business-to-consumer Tmall shopping platform is aimed at selling South Koreans agricultural and manufactured goods as well as tourism-related services, benefiting local companies, the finance ministry said.

“Alibaba has pledged to provide comprehensive marketing and consulting services to merchants that have signed up to sell their products on the Tmall site,” it said.

The Korea International Trade Association and the farm ministry will help make it possible for small and medium enterprises to sell products on Tmall, which effectively controls China’s Internet marketplace, it added.

Companies that want to sell on the platform must pay an annual fee and give Alibaba a commission for each product sold.

China’s top Internet company also will offer a three-month-long internship program to South Korean youths starting in July, so they can get a better grasp of Chinese consumers and the country’s domestic market, the ministry said.

The 20 people to be sent to China will gain first-hand experience with Alibaba’s e-commerce platform. Such experience can make it possible for these same people to acquire the know how to become the next generation of experts capable of helping local firms sell products directly to Chinese consumers on-line.

The finance ministry said Alibaba, moreover, wants to make South Korea one of its global logistics hubs and said it is seeking a partner for this endeavor.

In the opening event held in southern Seoul, Finance Minister Choi Kyung-hwan pointed out that Tmall is the most frequented on-line marketplace in China.

He stressed that South Korea can no longer rely on the export of intermediate goods to China with the slowdown in global trade, and must now aim to tap into the country’s vast consumer market. Intermediate goods are used to make finished products that are shipped abroad.

“There is solid demand for South Korean products among Chinese consumers who have been attracted to things such as fashion, cosmetics and even quality agricultural products,” the policymaker said. “If this kind of demand is mated to an effective e-commerce arrangement, it can greatly contribute to the success of local exporters.”

The ministry, meanwhile, said Choi held talks with Jack Ma, the head of Alibaba, at the launch event. It said the meeting was their third in less than a year, with both men exchanging views on expanding bilateral e-commerce cooperation that can benefit all sides.