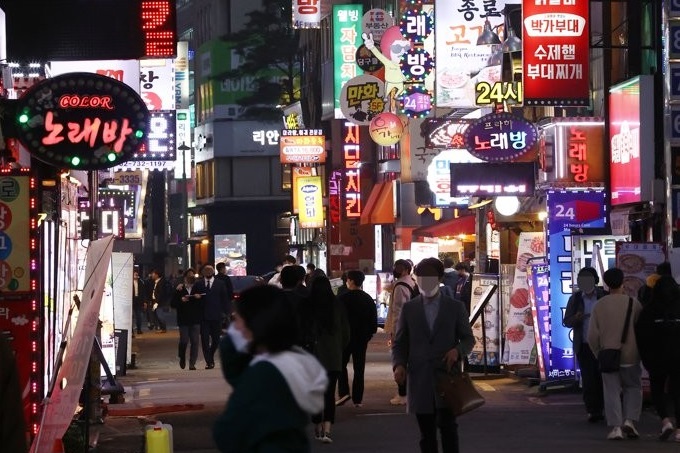 People walk on a street in Jongno in downtown Seoul, once a mecca for urban hipsters and bar hoppers before COVID-19 outbreaks, on April 14, 2021. (Yonhap)

SEOUL, May 25 (Korea Bizwire) — All employees of adult entertainment businesses across the country have been ordered to take coronavirus tests, officials said Tuesday, as many local governments are struggling to cope with the latest hotbeds for virus outbreaks.

Adult entertainment establishments, such as bars, clubs and karaoke rooms, in Daegu, Daejeon, Ulsan and many other regions nationwide have been ordered to take COVID-19 tests.

On Tuesday, the central city of Daejeon ordered all owners and employees of such nightlife establishments to get tested for the coronavirus within a week.

The measure came as part of the municipality’s efforts to prevent cluster infections related to such facilities from spreading to the local community, its officials said.

Since last Thursday, Daejeon has confirmed over 10 cases linked to entertainment businesses in the city, including five karaoke workers. An estimated 4,000 city residents are working at such facilities, according to the municipality.

Officials said virus tests are free of charge, but a fine of up to 3 million won (US$2,670) will be imposed on those who fail to comply with the administrative order.

No-assembly orders have been imposed on those facilities as well.

As of Tuesday, 179 virus cases have been reported in connection to a bar in Daegu since it confirmed the first related case earlier this month.

Some of the other local governments that have given compulsory testing orders included the southeastern city of Ulsan and the southwestern province of South Jeolla, where a spike in COVID-19 cases was seen in connection to entertainment establishments in recent weeks.