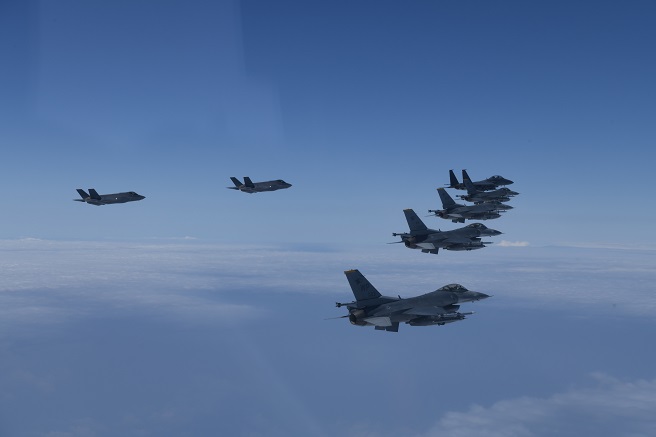 South Korea and the U.S. engage in an air power demonstration, involving F-35A radar-evading fighters, over the Yellow Sea on June 7, 2022, in this photo released by the South’s Joint Chiefs of Staff.

In the demonstration, the South mobilized 16 combat aircraft, including F-35As, F-15Ks and KF-16s, while the U.S. deployed four F-16 fighters, according to Seoul’s Joint Chiefs of Staff (JCS).

“The South and the U.S. demonstrated their strong capabilities to rapidly and accurately strike in the event of any North Korean provocations, as well as their will to do so,” the JCS said in a press release.

It added that the South Korean military, in close coordination with the U.S., is maintaining a “firm” readiness posture.

Seoul and Washington have been stepping up security coordination through such displays of military might in the wake of Pyongyang’s continued saber-rattling amid concerns about the possibility of it carrying out an underground nuclear test.

Seoul officials have warned that Pyongyang’s military provocations will be met with “corresponding” reactions.

Shortly after the North’s launch of three ballistic missiles, including an apparent intercontinental ballistic missile, on May 25, the South and the U.S. conducted combined missile launches in their first such joint move since 2017.