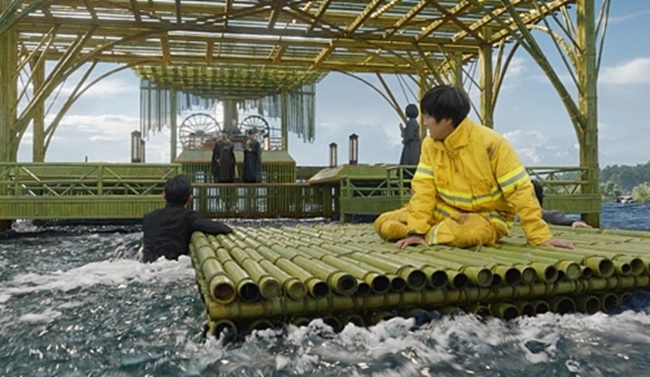 The first installment in the “Along With Gods” saga sold 2.7 million tickets from Friday to Sunday, according to the real-time based box office tally released by the Korean Film Council on Monday. (Image: Lotte Entertainment)

The first installment in the “Along With Gods” saga sold 2.7 million tickets from Friday to Sunday, according to the real-time based box office tally released by the Korean Film Council on Monday.

Based on a popular webtoon of the same title by Joo Ho-min, the movie tells the story of a righteous firefighter who is judged in seven hells for 49 days after his death, guided by three grim reapers.

The movie, starring Jung Woo-sung and Gwak Do-won, is about two men from South and North Korea who combine forces on a secret plan to prevent a nuclear war on the Korean Peninsula.

The American drama-musical “The Greatest Showman,” starring Hugh Jackman, came in third by selling 302,874 tickets. It was followed by seasonal kids animation “Pocket Monsters the Movie: I Choose You!” which garnered 173,279 views.

The German animated movie “Monster Family” debuted at No. 5 on the weekend chart with 134,719 tickets sold.

Meanwhile, “Along With Gods: The Two Worlds” also clinched the top spot in its opening weekend in Taiwan, according to its local distributor, Lotte Entertainment.

It opened on Friday in third place but climbed the chart powered by strong word-of-mouth, beating Hollywood heavyweights “Star Wars: The Last Jedi” and “The Greatest Showman.”

After Taiwan, the movie is scheduled to open in Thailand on Thursday and later in Vietnam, Laos, Hong Kong, Singapore, Malaysia, Cambodia, Australia and New Zealand.