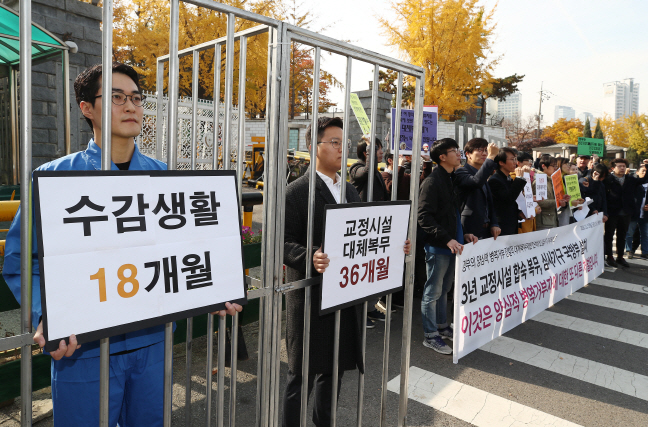 Activists and conscientious objectors hold a press conference in protest of the defense ministry’s alternative service proposal on Nov. 5, 2018. (Yonhap)

SEOUL, Oct. 2 (Korea Bizwire) — A UN investigator on freedom of speech and expression on Wednesday highlighted the need for an alternative military service that is not punitive but can be beneficial to both objectors and Korean society.

Speaking at a public session on alternative service for conscientious objectors at the National Assembly, David Kaye, UN special rapporteur for freedom of expression, said alternative service “should not be of punitive nature” and “the length of the service should be the same as military service.”

Kaye’s remarks come as Asia’s fourth-largest economy, where all able-bodied men must serve around two years in the military, is still debating the duration and nature of alternative service for men who reject the serving in the military due to religious or personal beliefs.

Following a landmark Constitutional Court ruling in June 2018 that recognized the need for an alternative form of service for the first time, the Ministry of National Defense mapped out a plan that gives conscientious objectors an option to work at correctional facilities for three years.

Critics, however, demanded the duration to be shortened to around two years. The National Human Rights Commission said “the service term of conscientious objectors should not surpass 1.5 times of that servicemen.”

Some also questioned the motivation behind limiting alternative service to work at correctional facilities.

Forcing conscientious objectors to work in prisons may be seen as a punitive measure that treats them as potential criminals, they said.

The UN investigator acknowledged that social stigma surrounding conscientious objectors is a complicated issue seen in many parts of the world.

“This is not only an issue in Korea, this is true in many parts of the world where conscientious objectors may be given lower quality or lower status and is seen that way by the society (they live in).”

However, Kaye stressed the need to diversify alternative service duties in a direction that can help erase the stigma and add value to society.

“The cause should be to create a system … that is available to conscientious objectors that is just as valuable and seen as valuable as military service. That should be the goal,” he said.

“It’s quite important for the alternative to military service to be something to add genuine value to the society … to do away with stigma but also move all of those who are in the position of evaluating to a place where they see the person claiming exemption from military, not exemption from service society generally.”

Since the 1950s, around 19,000 conscientious objectors, most of them associated with the Jehovah’s Witnesses, have been arrested and served jail terms of 18 months for rejecting conscription.