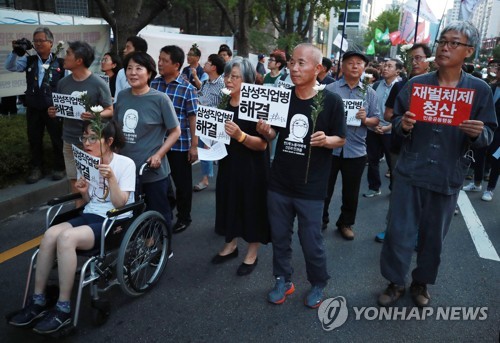 SEOUL, Jul. 5 (Korea Bizwire) — Members of Banollim, a civic group that advocates for the welfare of semiconductor factory workers, held a demonstration outside the Samsung Electronics head office in Seoul to commemorate the 1,000th day of protest following the death of a Samsung employee.

Banollim is composed of individuals whose family members died while working at a Samsung semiconductor plant.

The demonstration was held yesterday at around 6 p.m. at the company’s headquarters in Seocho-gu, led by Banollim and other civil rights groups.

The protest also commemorated the 30th anniversary of Moon Song-myeon’s death. Moon was a 15-year-old factory worker who died in 1988 after suffering from mercury poisoning.

While Samsung was not Moon’s employer, the civic groups regard the worker as being a victim of corporate negligence, the same logic applied to the deaths of those employed at Samsung’s semiconductor factory.

According to a press release issued by the civic groups, the health of over 320 victims was affected after they started working at Samsung’s factory, ultimately resulting in the deaths of 118 workers.

Kim Myeong-hwan, the head of the Korean Confederation of Trade Unions, said that in both cases, the deaths could have been avoided if business owners had been concerned about worker safety, and if the government had carried out its role to regulate and supervise.

The civic groups, advocating for stricter safety laws, harsher punishment for man-made disasters, and other measures that would protect workers’ rights, held a commemorative ceremony before heading towards Samsung’s head office to promote awareness among citizens of the health issues that arose from working at Samsung’s semiconductor plant.

The controversy surrounding the Samsung plant was sparked in March 2007 when Hwang Yu-mi, an employee at the company’s semiconductor plant in Giheung, died from leukemia.

Family members of victims like Hwang say that the deaths are closely linked to the working conditions at Samsung’s semiconductor factories.

Samsung handed out monetary compensation and issued an apology but did not recognize the link between factory conditions and the workers’ deaths, promoting civic groups to protest against this stance.