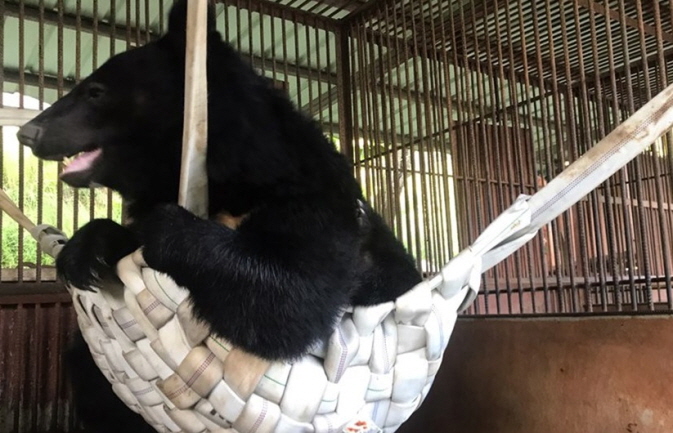 A bear is playing on a hammock. (image: Project Moon Bear)

SEOUL, Jun. 18 (Korea Bizwire) — Veterinarians and animal rights activists are presenting hammocks to caged bears to provide them with a better place to rest.

As part of its ‘Project Moon Bear,’ the civic group began visiting a bear farm in Boseong County, South Jeolla Province, and Cheongju Zoo last month to deliver hammocks for bear cages to help create an environment similar to what bears experience in the wild.

The Ministry of Environment reported that there are currently 31 bear farms across the country as of March, with 525 bears being kept in custody.

In South Korea, bears are prohibited from being used in food products other than the bear bile, making them a burdensome merchandise for bear farms as demand for bear’s bile is receding.

Most caged bears spend more than 10 years living inside a narrow cage and resort to abnormal behavior due to excessive stress before they pass away.

“Wild bears sleep on trees. That is why we wanted to at least offer the bears hammocks so that they could feel what it’s like to be in the wild,” said Dr. Choi Tae-gyu, a veterinarian and head of the Project Moon Bear.

“For wild animals, boredom is the most critical cause of psychological illness.”

The project plans to install hammocks in four additional bear farms across the country.