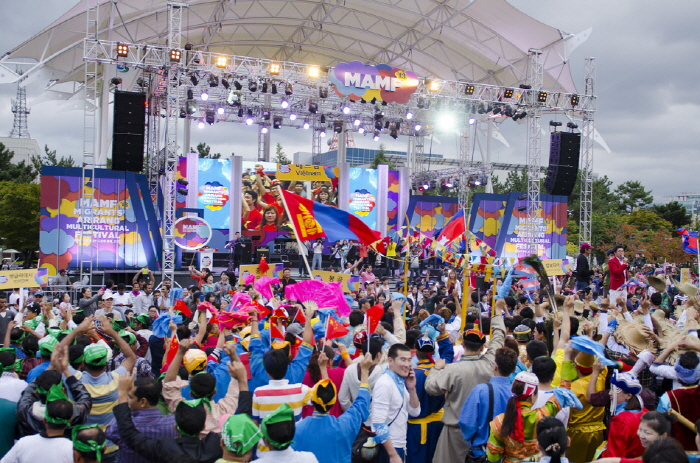 The 12th Migrants’ Arirang Multicultural Festival (MAMF) will kick off its three-day run Sept. 29, bringing together art troupes and cultural officials from countries in Asia and other parts of the world.

An art troupe from this year’s guest of honor Bangladesh and a multicultural children’s choir will perform during the opening ceremony at Yongji Culture Park. Bangladesh’s cultural minister will lead the troupe and attend the festival.

A troupe from the Korea Culture and Information Service under the Ministry of Culture, Sports and Tourism will participate in the festival for the first time, staging a performance titled “Hello, Mr. K,” which features South Korean culture, during the ceremony.

Major events include an academic seminar, a migrants’ song festival, the Asia Pop Music Concert and a multicultural street parade.

An international seminar will be held at Changwon University on the opening day to assess the role and value of the festival and introduce ways to promote cultural diversity.

The song festival will be held at Yongji Culture Park on the second say, with 10 finalists from the Philippines, China, Bangladesh, Russia, Paraguay and five other countries competing for the grand prize.

Clad in their respective traditional costumes, migrants from 13 nations, including Nepal, Vietnam, Uzbekistan and Thailand, will join the parade, the centerpiece of the festival, on the city’s central street on the final day.

Singers from nine nations will participate in the Asia Pop Music Concert on the last day, with South Korea’s Yoon Do-hyun, the MAMF promotional ambassador, and his rock band to give a celebration concert.

Visitors can also enjoy a variety of other events featuring participating countries’ traditional plays, craftwork and foods, with a multicultural marketplace also available.

In the runup to the festival, an art exhibition, dubbed Art in 2017 MAMF, will be held at the Seongsan Art Hall beginning Sept. 17, featuring contemporary artists from the participating nations.

The organizing committee said it is targeting 220,000 domestic and foreign visitors to the country’s biggest multicultural festival this year, up from 153,000 last year.