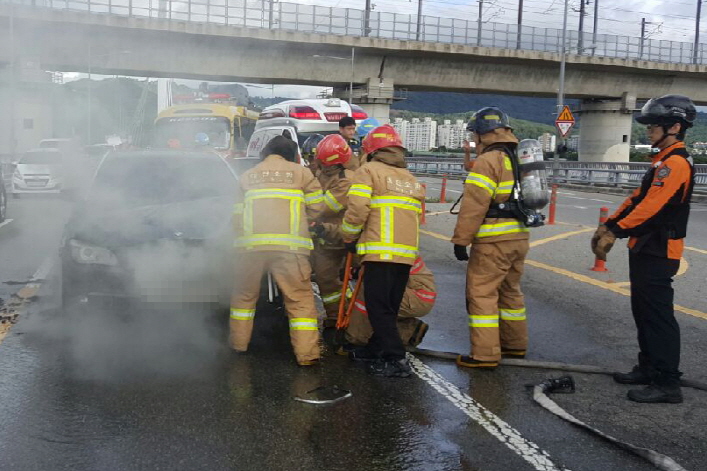 SEOUL, Aug. 30 (Korea Bizwire) — A BMW vehicle caught fire in South Korea on Thursday amid a series of similar cases that have led the German carmaker to start a massive recall in the country.

Local authorities said a BMW 750Li automobile caught fire at 3:58 p.m. in Daejeon, 160 kilometers south of Seoul, as it was being driven. The 2010 automobile, which runs on gasoline, was not on the list of cars recalled by the German carmaker.

The fire was extinguished within 20 minutes and no causalities were reported, as the driver escaped immediately.

Earlier in the day, a gasoline-fueled BMW 320i, which was also not recalled, caught fire in Seoul at around 12:15 a.m. The driver purchased the car last year. Another BMW 528i automobile reportedly caught fire on Wednesday.

BMW Korea said the fires in the BMW 320i and BMW 528i were not caused by defects in the automobiles.

The company said its investigation showed the BMW 528i caught fire due to an influx of rain that led to a short circuit. BMW said while its automobiles typically don’t catch fire because of rain, the vehicle had received repairs at an unauthorized repair shop.

BMW added that the BMW 320i caught fire because the driver attempted to start the engine even after the car had automatically stopped due to an influx of water.

In regards to the 750Li that caught fire on Thursday, the company said it has ascertained that the automobile had suffered serious damage in the past.

“The car in question did not receive inspections from BMW’s official service centers for five years,” the company said, claiming it is currently trying to find out more details.

Some 40 BMW cars have caught fire here so far this year, although there have been no injuries or fatalities. BMW’s South Korean unit began recalling more than 106,000 BMW cars last week.

The German carmaker has blamed the exhaust gas recirculation component as the “root cause” of recent fires. The EGR is one of the principal devices used to reduce nitrogen oxide emissions from diesel engines.