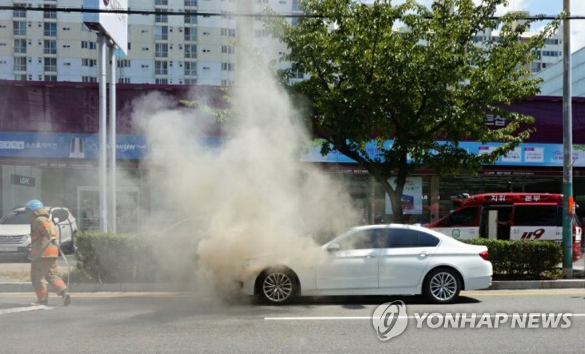 According to sources, this car even passed safety inspection at a service center on Aug. 1, creating greater uncertainties among the owners of the German premium brand. (Image courtesy of Yonhap)

SEOUL, Aug. 4 (Korea Bizwire) –A BMW sedan caught fire on a street in South Korea Saturday, the latest in a spate of reported car fires related to the German brand that have heightened safety concerns and prompted a recent massive recall here.

The fire broke out in the engine compartment of the BMW 520d while it was being driven on a street in Mokpo, about 410 kilometers southwest of Seoul, at around 2:15 p.m., according to police and firefighters. Sources said this car even passed safety inspections at a service center  ahead of the accident on Aug. 1, creating greater uncertainties among the owners of the German brand.

The fire was put out in 20 minutes, and no one was hurt. The exact cause is under investigation, they said.

The incident marked the 31st case of car fires linked to the German brand that have been reported so far this year. Of the total, 18 vehicles have been the 520d model.

Last month, BMW Korea announced a voluntary recall of its 42 models, totaling 106,317 vehicles, to fix a faulty component that appears to have caused fires in the engine area.

BMW presumed the exhaust gas recirculation — one of the principal methods used to reduce nitrogen oxide emissions from diesel engines — as the main cause of the recent fires in the engine compartment of the 520d sedan.

On Friday, the transportation ministry said that it will conduct a thorough investigation into the matter while advising the owners of those BMW sedans to restrain from driving them until safety is guaranteed.