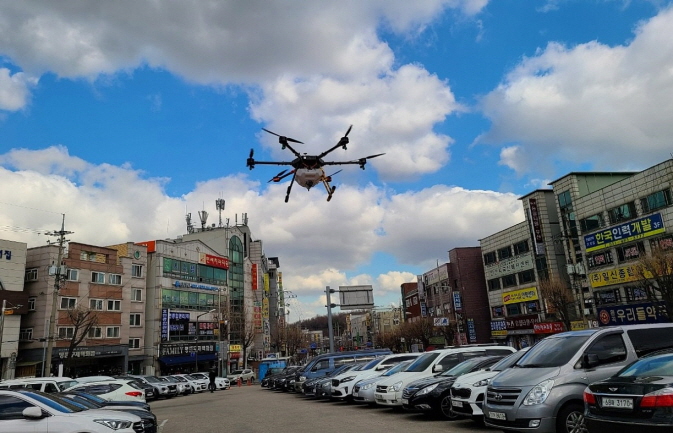 A drone spraying disinfectant at Ansan, Gyeonggi Province on March 3, 2020, amid the spread of the COVID-19 virus in the country. (image: Ansan City Office)

The city, home to a large number of foreign residents, plans to deploy drones to expand coverage in vulnerable areas.

The city organized a team of ‘drone quarantine volunteers,’ consisting of local residents who own large drones, to begin operations.

The team is expected to work twice a week, deploying eight drones to cover an area of 100,000 square meters for disinfection.

Ansan is home to the largest number of Chinese compatriots and foreigners in the country, but there haven’t been any confirmed cases of coronavirus yet.

There are currently 87,696 foreigners from 105 countries living in Ansan, which accounts for 14 percent of the city’s total population.

Among them, Chinese nationals and compatriots account for roughly two thirds of the total, which is the largest group of its kind across all regions. This initially led many on social networks to designate Ansan as the ‘most dangerous city.’

Ansan’s current success in fending off the coronavirus is based on the city’s preemptive measures taken against the pandemic since the Lunar New Year. 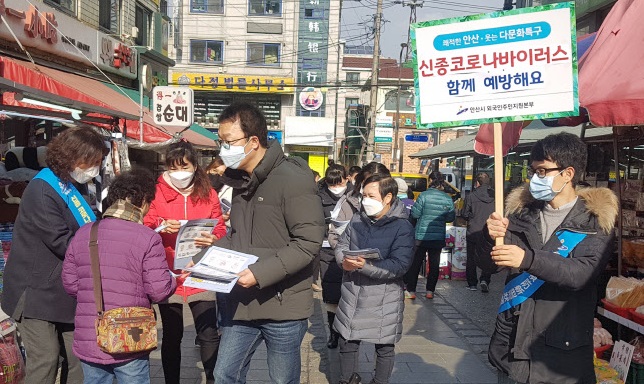 Ansan’s current success in fending off the coronavirus is based on the city’s preemptive measures taken against the pandemic since the Lunar New Year. (image: Ansan City Office)

The city has mobilized 1,265 civil servants and subcontractors to disinfect the entire city every two days.

Considering that the disinfectant lasts for at least 7 days, the city is basically ‘overreacting’ to the situation.

The city sorts out possible infections using thermometers at eight subway stations and the Express Bus Terminal used by 1.9 million people every day.

In neighborhoods popular among foreigners, including Wonkok and Choji-dong, 150 banners have been set up to inform residents about the coronavirus, and protective masks and hand sanitizer are available for free.

The city has currently distributed 300,000 protective masks to childcare centers, kindergartens, public transit facilities, and other vulnerable groups, and plans to send out 500,000 more.

Experts argue that Ansan’s unique quality of being a self-sufficient city, thanks to the Banwol and Sihwa industrial complexes, and the fact that local residents engaged in less contact with other regions can also be seen as the reasons for the city’s successful quarantine.

The city temporarily faced a risk of infection when a coronavirus patient from Anyang was found to have visited Ansan. Fortunately, however, there have been no confirmed cases of coronavirus as of yet.