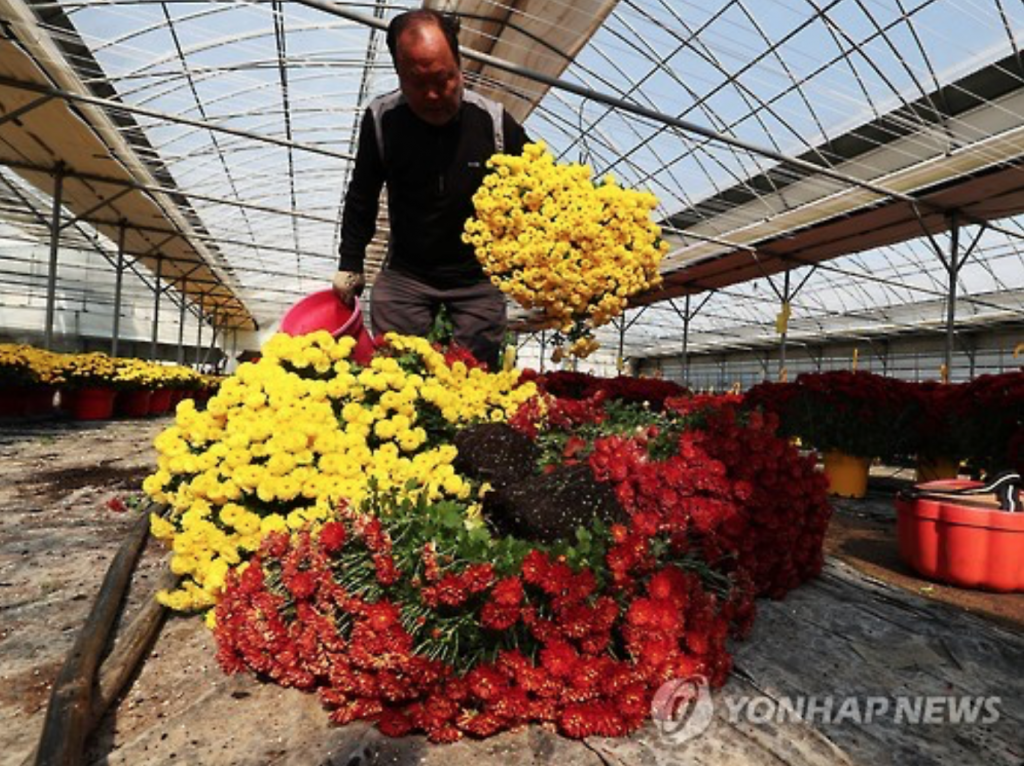 A flower grower destroys unsold chrysanthemums at a farm in Yongin, South of Seoul, on Oct. 25, 2016. (image: Yonhap)

SEOUL, Oct. 26 (Korea Bizwire) – Despite the high season, flower sales in South Korea have tumbled more than 20 percent in October from a year ago, data showed Wednesday, apparently due to the implementation of a draconian anti-corruption law.

According to the data by the Korea Agro-Fisheries & Food Trade Corp., flower transactions came to 1.96 million bunches in the first 24 days of this month, down a whopping 22 percent from the same period a year earlier.

The plunge is deemed unusual as flowers are in high demand in October when many youths tie the knot or companies start to announce their year-end promotions.

In South Korea, it has been customary to send a basket of flowers or a pot of orchids to congratulate people on promotions. Sending huge flower easels to weddings or funerals has been common as well.

Market watchers said the local floral industry seems to be hit hard as people tend to refrain from sending flower gifts for special occasions out of concern that they might be breaching the law. In South Korea, more than 50 percent of flowers are purchased as gifts.

Industry sources painted a gloomy outlook, saying demand for flowers will likely continue its downtrend down the road, given the impact of the anti-corruption law.

The law, which took effect in late September, bans public servants, educators and journalists from receiving free meals valued over 30,000 won (US$27), gifts worth more than 50,000 won, and congratulatory and condolence money of more than 100,000 won.

Violators face a maximum sentence of three years in jail and a fine of up to 30 million won. The anti-corruption law, which aims to root out corruption and irregularities existing in South Korean society, affects some 4 million people in the nation.