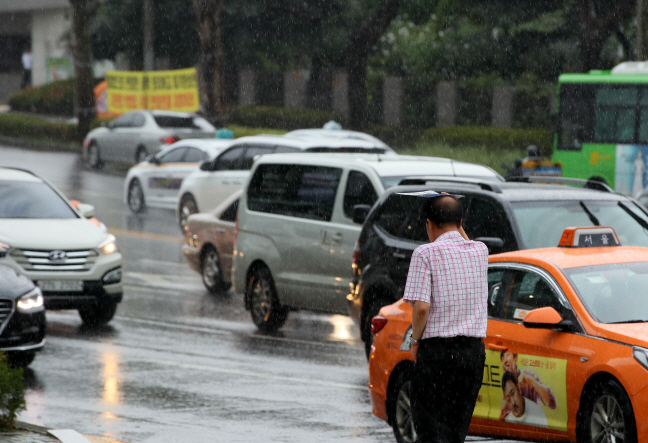 The 49-year-old victim, identified by his family name Kim, apparently drowned after he was stranded in rising water on a main expressway connecting northern and southern Seoul, according to firefighters and police.

Five vehicles had been trapped on the flooded expressway where Kim’s body was found early Wednesday about three hours into the search, police said. The expressway flooded about 3 m above the ground, and police restricted entry from 8 p.m.

Two other drivers — a 38-year-old man surnamed Lee and a 64-year-old woman whose last name is Bae — were safely rescued from the flooded road and were undergoing treatment at a hospital for minor injuries.

The capital city received massive rainfall throughout Tuesday, with as much as 75 mm of rain pounding northern parts of the city from 8 p.m. to 9 p.m. alone.

From midnight until 9 a.m. on Wednesday, the northern districts of Dobong and Nowon recorded 124.5 mm. The Jongno district in central Seoul recorded 97 mm.

The downpour and thunderstorms caused power outages and sinkholes in some areas of Seoul. An about three-meter wide, seven-meter deep ground surface collapsed in an elevator construction site at a subway station in Nowon.

The disaster relief division under the Ministry of the Interior and Safety said more than 480 calls were received reporting sewer overflows. About 31 residents in Eunpyeong, northwestern Seoul, are still unable to return home.

The heavy rain drove some 61 people from 41 households to evacuate and flooded 764 residences and stores nationwide. Repair work is underway to fix 109 stone-built structures and walls, the ministry said.

Authorities have blocked entrances to major national parks, bridges and underpasses while issuing flood and landslide warnings for key metropolitan cities near Seoul, including Incheon and Gyeonggi Province.

The weather agency predicted the rainstorm will continue in Seoul and central regions on Wednesday through Thursday afternoon.