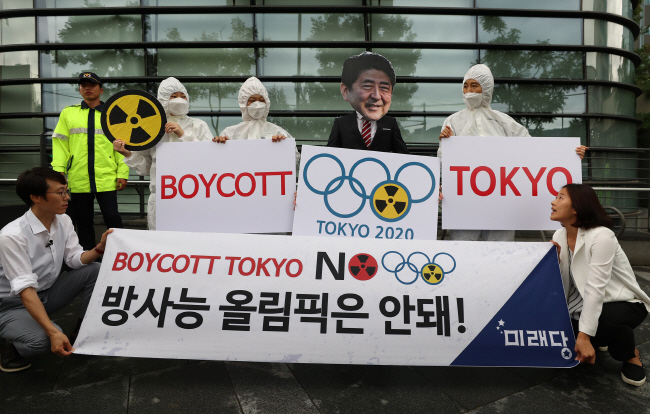 A group of activists stages a campaign to boycott the 2020 Tokyo Olympics while calling it the “Radioactive Olympics” in front of the Japanese Embassy in Seoul on Aug. 7, 2019. (Yonhap)

Consumers have been updating the list of boycotted items through social networks, and sharing ways to distinguish Japanese products by checking the barcode.

According to SSG.com, Shinsegae Group’s online shopping firm, sales of Japanese diapers, including those by GOO.N and Merries, between July 1 and August 8 dropped by 12 percent compared to the previous month, and 15 percent since on year.

NoNo Japan, a website that provides the boycott list of Japanese goods, is recommending Huggies as a better replacement for other Japanese brands.

When it comes to baby products, it has been a common practice among consumers to stick to the brands that they choose for the baby.

The boycott movement, however, seems to be encouraging consumers to use alternative brands.

Hobby items, including games and golf gear, are also being influenced by the ‘No Japan’ movement.

11Street, a major South Korean online shopping mall, reported that Nintendo sales between July 7 and August 6 dropped by 30 percent since the previous month.

SSG.com said that Honma, Xxio, and other Japanese golf brand sales between July 1 and August 8 dropped by 12 percent since the previous month.