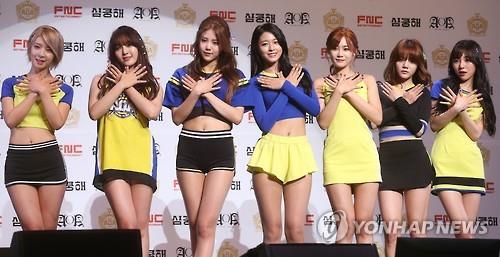 South Korean girl group AOA poses for a photo during a showcase in Seoul on June 22, 2015, to promote its third EP, “Heart Attack.” (image: Yonhap)

“Mune Kyun,” the Japanese version of the latest EP, “Heart Attack,” contains the title track of the same name along with “Confused” and “Joa Yo!” in Japanese translation, FNC Entertainment said.

The short version of the “Mune Kyun” music video has been listed on the homepage of Yahoo! Japan, drumming up anticipation for the upcoming release.

The eight-member group is scheduled to embark on a promotional tour in Japan on Thursday, stopping at Nagoya, Osaka and Tokyo in that order through Saturday.

AOA debuted in Japan with the EP “Miniskirt” in October and followed up with its second EP, “Like a Cat,” in February.