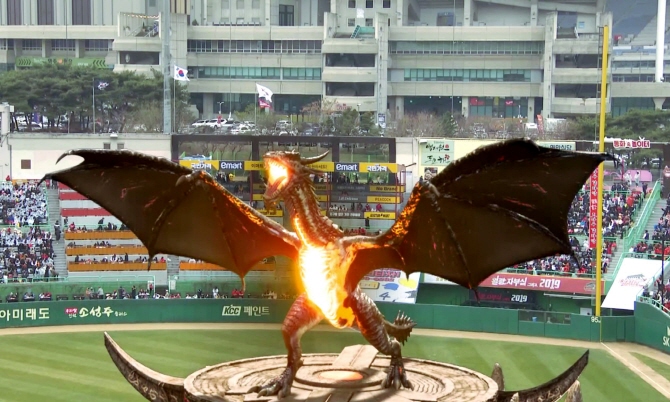 The video of the flying dragon was also aired live through a baseball broadcasting channel, allowing baseball fans to watch the show live on TV or on smartphones. (image: SK Telecom)

INCHEON, Mar. 25 (Korea Bizwire) — On Sunday, when the opening game of the Korean professional baseball league was held between SK Wyverns and KT Wiz at SK Happy Dream Park in Incheon, a flying dragon, which symbolizes the Wyverns, appeared on the world largest electronic scoreboard, ‘Big Board’.

The imaginary creature, a flying dragon, flew around the roof of the stadium and the stands showing off its golden wings. It landed on the ground displaying vibrant energy and the roar of a dragon.

The flying dragon showed signs of exhaustion, but it got back on its feet and flew into the sky after the crowd with access to smartphone application “5GX AR” pressed the cheering button.

It then turned into a flashlight and flew into the Wyverns’ locker room.

Shortly after the dragon disappeared, players rushed out of the locker room full of energy as if they were encouraged by the dragon and its powerful vigor.

The video of the flying dragon was also aired live through a baseball broadcasting channel, allowing baseball fans to watch the show live on TV or on smartphones.

The display of the dragon was possible thanks to the 5G technology of SK Telecom Co. and its major service, augmented reality (AR).

The display made use of sophisticated technologies that blurred the reality and virtual boundaries such as ’5G Hyper Space’ that virtualizes reality beyond simply duplicating 3D characters and ‘T Real Platform’ that freely creates and shares AR content.

Using these technologies, SKT reconstructed the entire stadium into a 3D digital model identical to its actual size, so that the large AR flying dragon was correctly aligned with the stadium space depending on its location and pose.

After the first inning, a quiz popped up on the app asking the audience how many strikes Kim Kwang-hyun, the Wyverns’ starter, would throw.

The answer turned into a paper plane and was shown flying to the center of the stadium within the application.

What SKT did was to create a game where spectators at the stadium share their experience together through AR services. 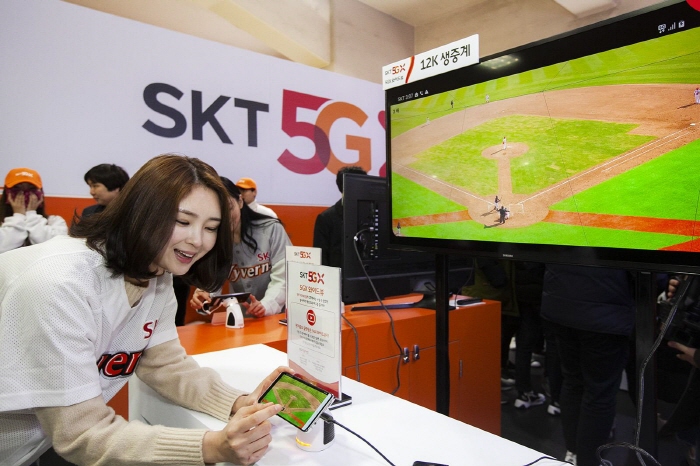 On the first floor of the hall on the first base side of the baseball stadium, there was a ’5GX Experience Zone’ for the audience to enjoy.

At the experience zone, ’5GX Wide View’ service, which allows users to see the entire baseball stadium in ultra-high definition, drew much attention by utilizing the high-speed and large-capacity characteristics of 5G.

By using nine cameras installed on the pitch, a smartphone could be scrolled up and down with the fingers, allowing a panoramic view of 180 degrees to be seen in ultra-high definition.

It also provided a ‘pinch zoom’ function that extends part of its needs to high-definition and a ‘multi-angle’ function that allows for the viewing of images in the direction of home, first base and third base.

Using the mobile transmission technology, True Live Streaming (TLS), SKT also showcased “Social VR Live,” which allows users to watch videos, including live baseball, along with up to eight participants in virtual space, which is 3 to 15 seconds faster than competing services.

Viewers can also use avatars to watch the game, chat or cheer together.