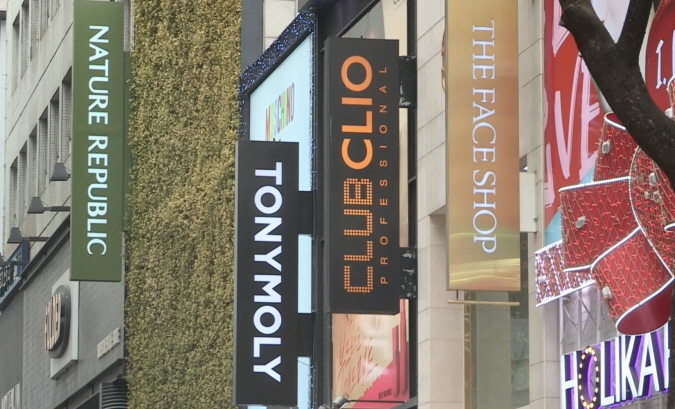 The decrease in spending has been seen by some as a clear sign that consumers are weighing the cost-effectiveness of their options when making purchasing decisions.

According to the Bank of Korea on Tuesday, credit card spending on clothing and miscellaneous goods reached approximately 14 trillion won last year, down 2.4 percent from a year earlier.

Broken down by detailed items, credit card use for cosmetics fell 6.6 percent on-year to 2.98 trillion won (US$2.59 billion), marking the third consecutive year of decline following a 3 percent drop in 2016 and 3.2 percent decrease in 2017.

Aggregate credit card transactions at clothing and textile companies came to 8.17 trillion won, down 2.3 percent from the previous year.

The value of clothing and textile purchases made using credit cards has steadily decreased from 2013 to last year.

However, a series of declines in the cosmetics and clothing sectors were attributed to consumer spending patterns transitioning to cost-effective products rather than expensive products amid a prolonged slowdown in economic growth, according to analysts.

In the clothing industry, SPA (speciality retailer of private label apparel) brands, which are relatively cheap, seem to be gaining popularity as manufacturing companies are responsible for product planning, distribution and sales.

Consumers have become more inclined to pay for cost-effective products, focusing on fashion brands such as Zara and Uniqlo.

“If the economy goes bad, consumers will cut down on cosmetics and clothing consumption, not daily necessities,” said Sung Tae-yoon, a professor at Yonsei University.

He went on to say, “In contrast, it is possible that those in the higher income brackets continue to buy high-end brand products.”