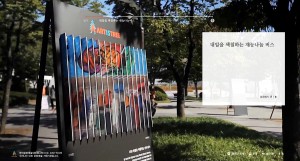 The campaign steers the visitor on a walking trail showing displays as she clicks her way on the trail. (image:The Arts Council Korea)

SEOUL, Korea, Dec 17 (Korea Bizwire) – The Arts Council Korea, an organization under the Ministry of Culture, Sports, and Tourism, said on December 16 that it would kick off a campaign “One Step to Art” (onesteptoart.org) showing how art patronage could change the lives of the underprivileged. The campaign, consisting entirely of web promotion, steers the visitor on a walking trail showing displays as she clicks her way on the trail. She will understand slowly how art could grant dreams and hopes to those deprived of them.

Choi Yoo-soo, an individual in her late 20s who decided to support art and culture after visiting the website, said, “In the beginning I kept exploring the site just because the interface was refreshing and interesting. But I learned that I could change some people’s lives with a little bit of help of mine.” 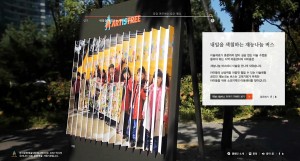 As the nation becomes economically prosperous, people’s attitude toward art and culture has changed with it. (image:The Arts Council Korea)

As the nation becomes economically prosperous, people’s attitude toward art and culture has changed with it. Most people no longer treat art as something not so essential and enjoyed only by privileged class. The latest campaign is intended to dispel that kind of thinking and promote the idea that art is for everyone to enjoy.

An official of the art sharing division at the Arts Council Korea said, “We do a variety of art projects for the socially vulnerable from charity funds from donors. The funds collected from the current campaign will also be used to pay for the same purpose.” For more information, visit the organization’s website at onesteptoart.org.