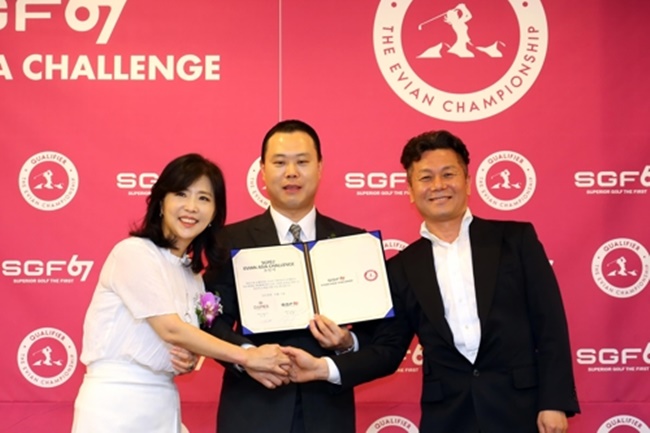 Jean Moe (L), the managing director of the SGF67 Evian Asia Challenge; Kim Dae-hwan, CEO of Superior; and Choi Kyeong-jai, head of Evian Korea, pose for pictures on April 3, 2018, after Superior’s golf apparel brand, SGF67, signed on as the title sponsor for the Evian Asia Challenge, the regional qualifying tournament for the LPGA Tour’s Evian Championship, in this photo provided by the event’s organizers. (Image: Yonhap)

The SGF67 Evian Asia Challenge, the regional qualifiers for the LPGA Tour’s fifth major, will be played at the 360° Country Club in Yeoju, 100 kilometers south of Seoul, on June 4 and 5.

South Korean golf apparel brand SGF67 signed on as the event’s title sponsor in a ceremony in Seoul on Tuesday. The final winner of the event will compete in the Evian Championship from Sept. 13 to 16 at the Evian Resort Golf Club in France and will receive a full accommodation and flight package.

The Evian Asia Challenge will feature Korea LPGA professionals, as well as amateurs aged 14 or older from Japan, China, Thailand and Japan.

“We have grown into an Asia Challenge where young golfers all over Asia will gather together to compete for their dream,” said Jean Moe, the managing director of the event. “This is a very important event for Evian Championship and its sponsors and partners to resonate the spirit of Evian Championship, and encourage international golf talents to challenge for their dream.”

Applications for the Evian Asia Challenge will be available on the official website (www.evianchallenge.co.kr) starting at 10 a.m. next Monday.