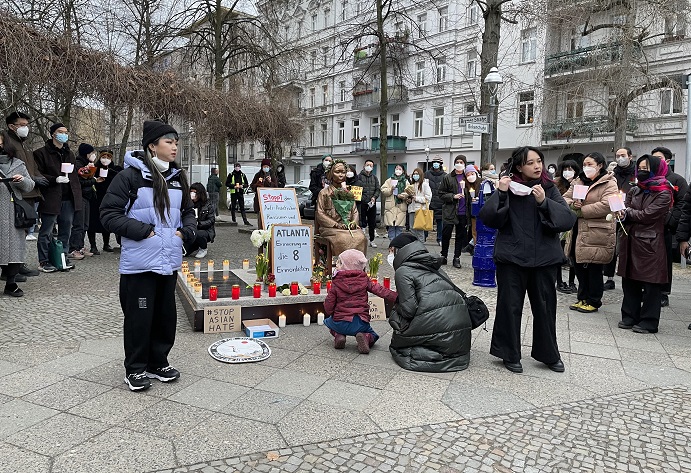 German people of Asian descent hold a rally in front of the Statue of Peace, which symbolizes Korean victims of Japan’s wartime sexual slavery, in Berlin on March 23, 2021, to protest against anti-Asian hate crimes after a series of shootings by a 21-year-old man in the U.S. city of Atlanta last week that left eight people dead, six of them women of Korean and Chinese descent. (Yonhap)

SEOUL, March 25 (Korea Bizwire) — Second-generation Asian immigrants in Germany held a vigil in front of the Statue of Peace in Berlin on Tuesday (local time) to remember the victims of the recent deadly shootings in Atlanta and urge the public to put a stop to hate crimes against Asians.

Hosted by local civic group Korea Verband and five other organizations run by second-generation Asians, the rally was attended by more than 300 people.

Participants each carried a candlelight, paying a minute’s silent tribute to the Atlanta victims, before the rally took place.

“We gather here today as Asian minorities in Germany, remembering the eight victims of the racial shootings that happened in Atlanta on March 16, and to stand up against racism,” said Thu Nguyen, a Vietnamese activist for Korea Verband and co-host of the vigil.

“Six of the victims were Asian women. We believe that this tragedy is a product of white supremacy, hatred towards women, and capitalism,” Nguyen said.

“This isn’t a one-time act of crime. This is the result of extreme sexual objectification of Asian women that has persisted throughout centuries, especially in wartime.”

“We gather here today in front of the Statue of Peace to tell the world about the unjust acts that women in both the past and present had to suffer,” Nguyen added.

The vigil was accompanied by songs and rap performances by second-generation Asians. People lined up to lay flowers for the victims of the Atlanta shootings.

“What happened in Atlanta is a shocking tragedy and should never be repeated,” said Khai Bui, a second-generation Vietnamese who took to the podium during an open mic session.

“My friends were too scared to go outside. They had enough of violence and pain.”

“We should now break our silence,” Bui said. “We’re not ‘silent Asians’ anymore. Let us rise up and fight racism.”