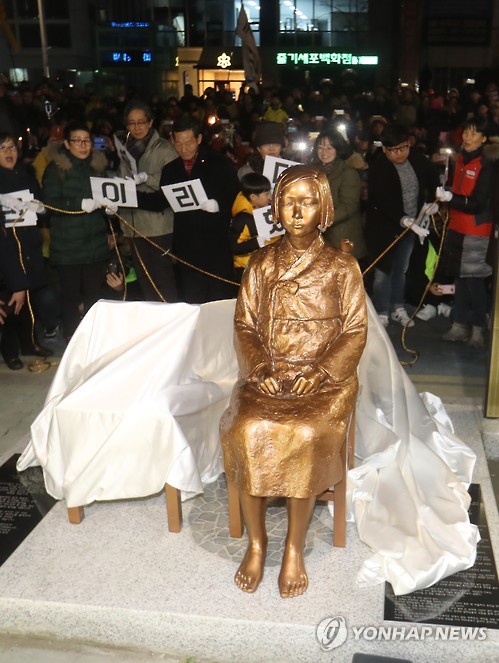 BUSAN, Jan. 2 (Korea Bizwire) – The civic organization that erected in Busan last week a “comfort woman” statue representing the victims of Japan’s wartime sexual slavery is now attempting to have it designated as a public sculpture.

Members of the organization tried to install the statue last Wednesday in front of the city’s Japanese consulate, but were unsuccessful after local district officials and the police intervened, confiscating the sculpture.

However, following a barrage of criticism including angry phone calls and online comments posted on the district’s website, officials ultimately authorized the statue’s installation on Friday.

According to officials from the organization, the statue is the result of year-long protests in front of the consulate demanding an official apology for Japan’s war crimes, and  nationwide support, which made possible its installation despite initial objections from the local government, and as such, it deserves the right to be registered as a public sculpture.

They also added that having it registered would help to prevent potential damages to the property, as has sometimes been observed at other comfort woman statues in the country.

Currently, there are more than a two dozen comfort woman statues in Korea, some of which have been designated as public sculptures – like the one in Wonju, Gangwon Province –  and others, which are undergoing the registration process.

“The only way for Dong District to make full amends for its misdeeds and for forcefully removing the statue, is to have it registered as a public sculpture,” said an activist from the organization.