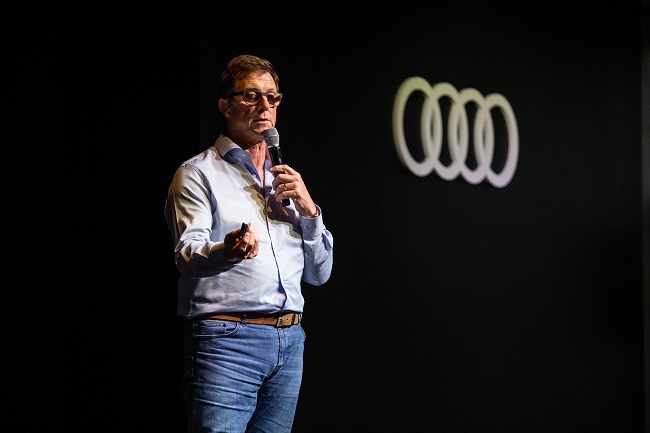 In this photo, provided by Audi Korea and taken on July 13, 2020, Executive Director Jeff Mannering in charge of Audi’s South Korean operations answers questions from reporters on its business strategy in Korea after a media test drive event held at Sagewood Hongcheon resort in Hongcheon, 100 kilometers east of Seoul.

HONGCHEON, July 17 (Korea Bizwire) — Audi Korea said it plans to launch more all-electric vehicles to fill 35 percent of its lineup with the emission-free models by 2030 amid rising demand for environment friendly cars.

“The switch from combustion engines to electric vehicles is coming worldwide, not just in Korea. I believe that emission-free driving is a part of sustainability, like a focus of automotive companies,” Audi Executive Director Jeff Mannering in charge of South Korean operations told reporters after a media test drive event held Monday.

In the coming months, a lot of companies will start to introduce more electric vehicles in global markets, and Audi will do so as well, he said.

Audi currently sells the e-tron Sportback SUV in the United States and unveiled the Q4 e-tron SUV concept this month with an aim to mass-produce the model next year.

It also unveiled the prototype of the e-tron S high-performance SUV in February.

The company said it is considering introducing the new e-tron models in the Korean market to take advantage of growing local appetite for EVs and improvements in the charging infrastructure.

“One of the biggest challenges for EVs in every country in the world is how do I charge my EV,” said Mannering.

“Korea is probably world leader in public charging infrastructure and that’s probably why now is the right time for us to introduce the car because you only have to drive 30 kilometers to the next charging station.”

A total of 20,947 chargers, including 7,243 fast chargers, were available across the country as of June 30, according to the transport ministry. The government aims to increase the number of fast chargers to 10,000 by 2022.

Audi Korea’s aggressive EV push is in line with Audi AG’s long-term business plan to increase its proportion of electrified vehicles, including plug-in hybrid models, to 33 percent by 2025.

These photos, taken on July 13, 2020, show the front and rear of the all-electric Audi e-tron 55 quattro model. (Yonhap)

The current global situation reinforces the importance of sustainability economically, socially and environmentally. And emission-free drive systems have their part to play, Mannering said.

The e-tron 55 quattro SUV comes with a higher-capacity 95-kWh battery pack, and its two electric motors fitted to each axle on the front and rear can generate a combined 360 horsepower.

The company said it will deliver a three-year warranty for the e-tron, with the guarantee period for the battery reaching eight years.

It can travel up to 307 kilometers on a single charge and accelerate from zero to 100 kilometers per hour in 6.6 seconds, it said. The zero-emission SUV is available for 117 million won (US$98,000).

Its overall sales from January to June more than quadrupled to 17,751 vehicles of the four brands from 4,442 units in the year-ago period, according to data from the Korean Automobile Importers and Distributors Association (KAIDA).