SEOUL, April 8 (Korea Bizwire) – The oldest son of late actress Audrey Hepburn is creating a forest in South Korea to commemorate the hundreds who were killed or went missing when a ferry capsized last year, a Seoul-based non-profit group said Wednesday.

Sean Hepburn Ferrer, who spent a year in South Korea in the 1970s filming a movie, contacted Tree Planet to suggest the idea in May 2014, according to the environmental group.

Tree Planet is a South Korean group that strives to tackle desertification through funds raised from a smartphone game app.

South Korea is about to mark the one-year anniversary of the Sewol ferry sinking off the southwest coast on April 16. It is one of South Korea’s deadliest peacetime disasters, leaving more than 300 people, mostly teenagers, dead or missing.

Jang Byeong-joon, a spokesman at Tree Planet, said Ferrer wanted to continue his mother’s legacy of serving disenfranchised children. Audrey, a British actress and renowned humanitarian, had served as the Goodwill Ambassador for the United Nations Children’s Fund from 1989 until her death in 1993.

The “Sewol Memorial Forest” will be created on a hill on the southwestern island of Jindo. The hill is located about 4 kilometers away from the port closest to the accident site, he said.

Jang also said Tree Planet has been studying memorial forests in other countries, including the National September 11 Memorial & Museum in the U.S., for the past 10 months and is ready to get to work on Friday. 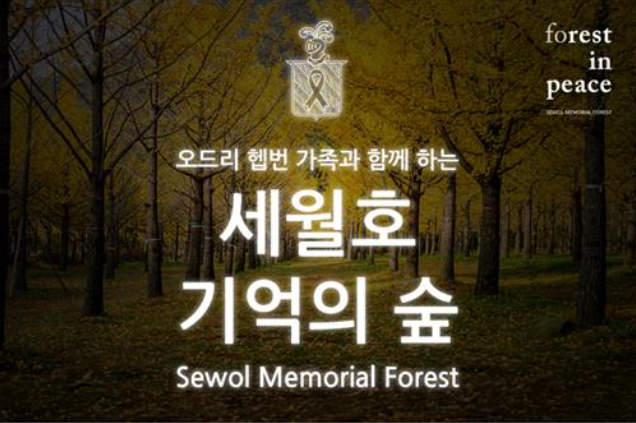 The project has the blessing of the bereaved families, who hope the forest would memorialize not only the deceased but their close friends and families, the spokesman said.

Jang plans to announce details of the project at a press conference on Thursday morning in Seoul where Ferrer will join along with his wife and children.