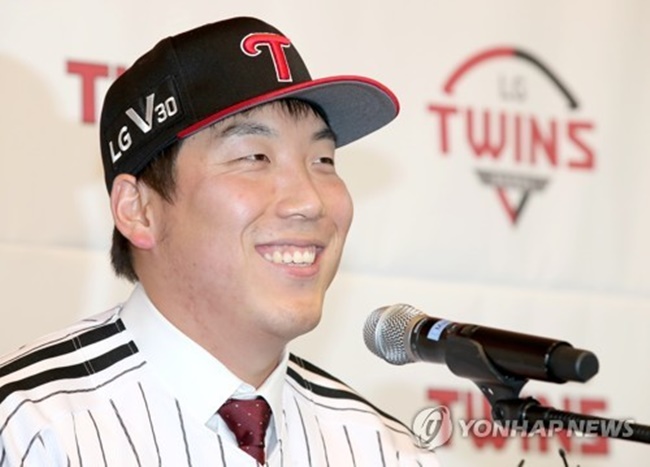 SEOUL, Jan. 5 (Korea Bizwire) – Before he left for the United States to join the Baltimore Orioles in winter of 2015, South Korean outfielder Kim Hyun-soo said he was determined to finish his playing career in the majors — so much that he said he’d consider himself “a failure” if he ever returned to the Korea Baseball Organization (KBO) again.

As fate would have it, Kim is actually back in the KBO, having signed a four-year, 11.5 billion won (US$10.8 million) deal with the LG Twins. It ended his two-year big league stint split between the Orioles and the Philadelphia Phillies.

Now that he is actually in the KBO again, does Kim consider himself a failure now?

Speaking with reporters at Jamsil Stadium in Seoul, the Twins’ home, Kim said, if nothing else, he regrets what he said a little more than two years ago.

“When I was going to the majors, I was just fearless, and I think I was even a bit brash because things had been going so well for me,” Kim said, thanking reporters for bringing up the issue.

“This is what happens when you run your mouth,” Kim went on. “I figured I’d be just fine over there and I’d be playing every day like I had in Korea. But I was just not prudent. I need to watch what I say.”

In the KBO, Kim had been a perennial All-Star with the Doosan Bears, and has a lifetime .318 batting average, third-highest mark among active players with at least 3,000 plate appearances.

Kim also has some pop. The Bears and the Twins are co-tenants of Jamsil, the league’s largest ballpark, and Kim has had three 20-homer seasons there while playing for the Bears.

The Twins are hoping for similar production from Kim, who is entering his age 30 season and should still have much left in his tank.

The Twins missed the postseason in 2017 despite having the league’s lowest ERA with 4.30, because they ranked at or near the bottom in key offensive categories.

Manager Ryu Joong-il may envision Kim as a middle-of-the-order type of hitter, but Kim said he prefers to hit in the No. 2 hole.

“I prefer that spot because I can get a lot of plate appearances,” he said. “But no matter where I end up hitting, I will try to do my job.”

“American players who have faced KBO pitchers actually say Korean pitchers are pretty tough to hit,” Kim said. “It’s not just velocity. I have to keep an eye on a lot of different things.”

As for his goal in his first season with the Twins, Kim said, “I’d love to play some postseason baseball.”