“I’ve been loved so much by EXO fans for the past 10 years and I’ve been happy throughout my 20s,” the singer said in an online press conference.

“Before having a hiatus, I wanted to show my love and affection to them. So I’ve put a great deal of sweat and effort in this project.”

“Bambi,” the EP set to be released later in the day, will carry six R&B love songs, including the namesake lead track, “Love Scene” and “Cry For Love.” It is his third solo project, following “Delight” (2020) and “City Lights” (2019).

“For the new album, I focused on highlighting my vocals. I hope it shows the improvement in my vocal skills,” he said. “Especially, title track ‘Bambi’ is a mature love story and presents my growing up from a boy to a youth.”

The melody and rhythm of the title number fit perfectly with his voice and wide vocal range, with the lyric tune of the guitar, he said. 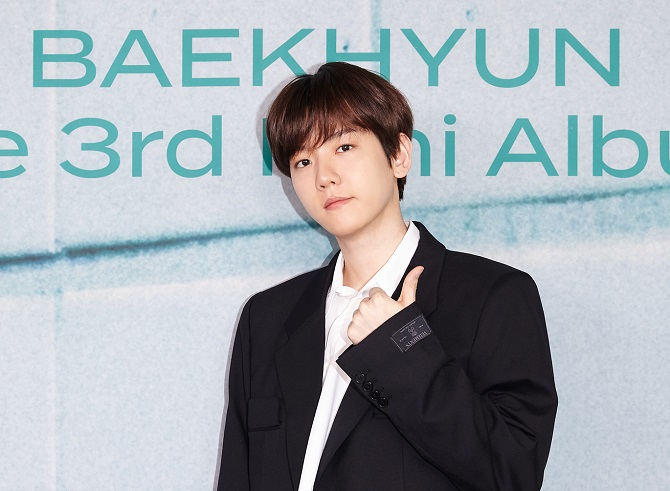 In this photo provided by SM Entertainment, Baekhyun, a member of K-pop boy band EXO, poses for a photo at an online press conference on his new solo EP “Bambi” on March 30, 2021.

Baekhyun, who made his K-pop debut as an EXO member, has made his presence felt on the Korean pop music scene not only as a lead vocalist of the nine-man band but also as a soloist.

His previous seven-track EP, “Delight” sold over 1 million copies, helping the singer become the first singer to earn the “million seller” title through both group and solo projects in 20 years after K-pop icon Seo Taeji back in 2000.

“I was so happy with that achievement. I felt I was rewarded for my efforts,” he said. “But it is not because of my own name but because of long-term experience that I’ve had within the band EXO. And supportive EXO fans also led me.”

The new solo album is also on the verge of setting a new record as it has scored over 800,000 preorders.

Despite the high anticipation for the album, he said he feels sorry for having a respite due to the 18-month military duty, which all Korean able-bodied man have to serve.

“I’ve prepared this project as my last gift for my fans, but it’s like I’ve got a present from my fans, instead of giving it to them,” he said. “I’m so sorry that I have little time before entering the service.”

He is reportedly to start his duty next month as the sixth EXO member to enlist in the military.

Chanyeol began his military service this week, while Chen and Suho started their duty last year. Xiumin and D.O. have already completed the service.