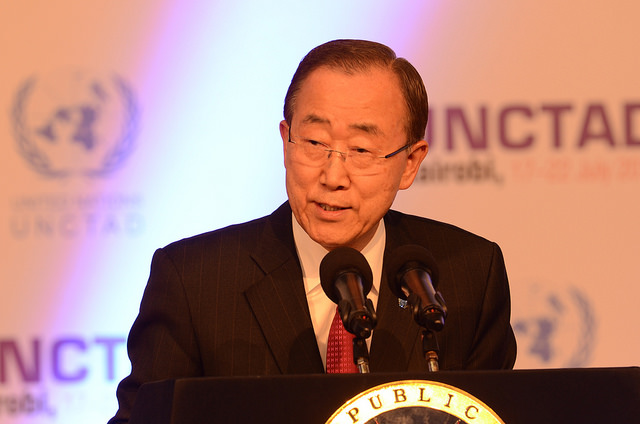 Ban, whose term ends on Dec. 31, said he would devote himself to the advancement of South Korea with his extensive experience at the United Nations. (image: Flickr/ UNCTAD)

SEOUL, Dec. 22 (Korea Bizwire) – U.N. Secretary-General Ban Ki-moon emerged as the most-favored presidential hopeful after he hinted at his willingness to run in next year’s election this week, a poll showed Thursday.

According to the survey conducted by pollster Real Meter, Ban’s approval rating increased 2.6 percentage points to 23.1 percent this week. He outpaced Moon Jae-in, former head of the opposition Democratic Party, who garnered a 22.2 percent support, down 1.5 percentage points.

The survey was conducted on 1,519 South Koreans from Monday to Wednesday, with a margin of error of plus or minus 2.5 percentage points.

Ban, whose term ends on Dec. 31, said he would devote himself to the advancement of South Korea with his extensive experience at the United Nations. Ban also said he would contemplate his role after he returns home.

The pollster said the increase came as the public understood Ban’s remark as a decision to join the race, which may come earlier-than-scheduled due to the impeachment of President Park Geun-hye.

In a separate poll conducted last week, Moon and Ban earned approval ratings of 46.8 percent and 35.5 percent, respectively, in a hypothetical two-way race in which they run for the Democratic and Saenuri parties.

Lee and Ban posted 42.3 percent and 39 percent, respectively, if they were to run for the same parties it also showed.

Ban and Ahn posted 36.8 percent and 35 percent in a hypothetical showdown.