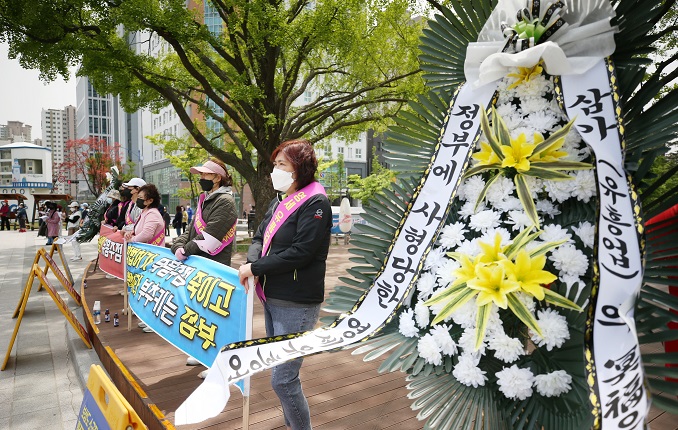 Bar owners in Incheon protest the city’s ban on the operations of entertainment bars at a protest rally in front of the city hall on May 6, 2021. (Yonhap)

INCHEON, May 10 (Korea Bizwire) — Hundreds of bars in the western port city of Incheon on Monday postponed plans to reopen their doors in defiance of a government order to shut down during COVID-19.

An association of bar owners in Incheon, west of Seoul, said their businesses will remain closed till Friday while it seeks further negotiations with the city government over business resumption.

Last week, the association declared that a majority of more than 1,000 bars in the city would defy the government order and reopen their businesses, starting Monday.

The city government of Incheon reimposed a sweeping ban on entertainment establishments, including bars and nightclubs, on April 12 amid a resurgence of coronavirus cases in the capital area.

The greater capital area is currently under Level 2 social distancing guidelines whereby restaurants, bakeries and cafes are ordered to close at 10 p.m. to prevent infections, whereas drinking establishments are entirely prohibited from operating.

Bar owners in Incheon have denounced the ban as a “death sentence” and demanded financial and other support measures from the city government.

“Having received a positive response recently from the city of Incheon, we decided to put the reopening plan on hold till Friday,” Chung Se-young, chief of the association, said, adding that the group was demanding the city allow bars to reopen at least in a restricted manner.