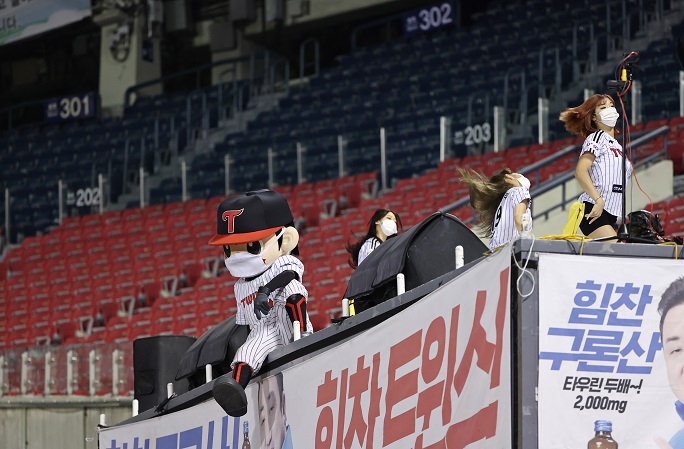 In this file photo from Sept. 10, 2021, a mascot for the LG Twins takes a breather during a Korea Baseball Organization regular season game between the Twins and the Hanwha Eagles at Jamsil Baseball Stadium in Seoul. (Yonhap)

SEOUL, Oct. 15 (Korea Bizwire) — South Korean professional sports leagues welcomed the government’s decision on Friday to allow fully vaccinated people at outdoor sports games in the capital region, where teams have been playing in empty stadiums for the past three months during the fourth wave of the COVID-19 pandemic.

Starting Monday, pro sports teams in Seoul and in surrounding cities will be permitted to accept fans at a maximum 30 percent of stadium capacity, provided that they are fully vaxxed.

For indoor venues such as basketball and volleyball arenas, the size of the crowd will be capped at 20 percent.

South Korea is gradually easing virus curbs on the fully vaccinated as it prepares for an eventual return to normalcy.

“We’ll try to ensure safe and healthy viewing experience for fans going to stadiums,” a KBO official told Yonhap News Agency. “Teams will try to finalize their plans to accept fans and set their schedule to open back up accordingly.”

Later Friday, the KBO announced all five clubs based in and around Seoul will be prepared to swing open their gates immediately when the new rule takes effect.

Those five teams are: the LG Twins, the Doosan Bears and the Kiwoom Heroes in Seoul, the SSG Landers in Incheon, and the KT Wiz in Suwon.

KBO clubs are typically off on Mondays, and the Twins will become the first of this quintet to resume playing in front of fans when they host the Heroes at Jamsil Baseball Stadium on Tuesday.

The Twins and the Bears share Jamsil as their home. The Heroes play at Gocheok Sky Dome, which, as an indoor venue, will have fans at 20 percent capacity.

In the KBO, five out of 10 clubs are based in the capital region. Of those five, the Kiwoom Heroes play at an indoor facility: Gocheok Sky Dome in Seoul.

The loosening of the rules should be a major boon for the KBO.

All four teams in the capital area with outdoor stadiums — the league-leading KT Wiz, the LG Twins, the Doosan Bears and the SSG Landers — are in playoff contention.

They will now be able to play home games in front of fans as they try to lock down postseason berths over the final two weeks of the regular season. 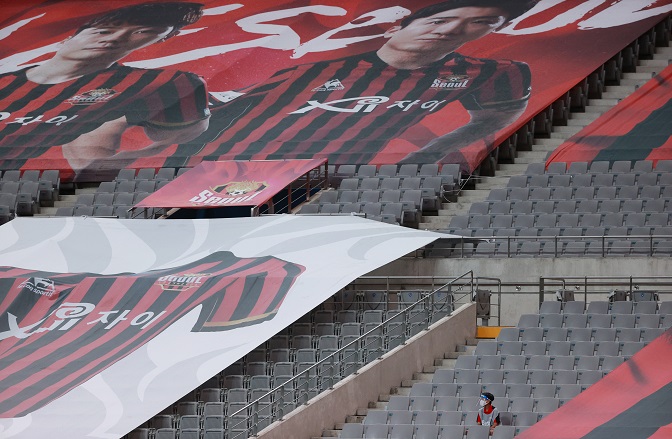 This file photo from Aug. 18, 2021, shows an empty Seoul World Cup Stadium, with seats covered in banners, during a K League 1 match between FC Seoul and Jeju United. (Yonhap)

At two levels of K League football, nine out of 22 clubs are in and around Seoul.

“We’re entering the final portion of the K League 1 season, and the league champions will be crowned in the coming weeks, as well as promoted and relegated clubs,” a K League official noted.

“It’s great to have at least some fans back for some exciting late-season action. This will bring the entire league back to life.”

The new K League season began in February and the KBO followed in April in front of capped crowds.

But the leagues’ hopes of competing at full houses were dashed when South Korea started seeing a surge in COVID-19 cases in July and tougher restrictions were put in place.

All pro sports teams in the country spent most of 2020 without spectators. Gates opened up a bit toward the end of the year, fueling expectations that things would return to normal for 2021.

The Korean Basketball League (KBL) has five of its 10 teams based in the greater Seoul area. The new KBL season tipped off last Saturday.

The Women’s Korean Basketball League (WKBL) starts its new season on Oct. 24. Three of its six teams are based in the capital region.

But all six teams are planning on playing their first five games of the season at empty arenas out of precaution, and then opening up their gyms in November.