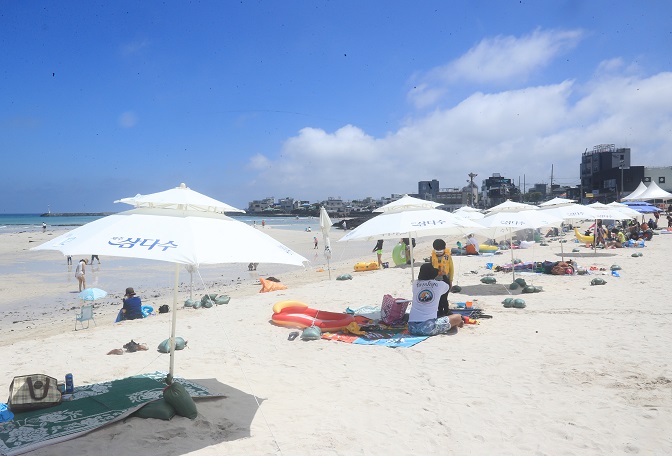 Vacationers keep a distance from one another at Hyeopjae Beach of Jeju Island on its opening day, July 1, 2020. (Yonhap)

SEOUL/JEJU, July 1 (Korea Bizwire) — Beaches across South Korea formally opened for the summer holiday season Wednesday, but vacationers are obliged to comply with strict disinfection and social distancing rules to curb the spread of the coronavirus.

Some 270 beaches nationwide began to welcome visitors under strict COVID-19 guidelines, including a two-meter distance between parasols and tents, restrictions on the use of shower booths, avoiding physical contact with others and wearing a face mask when not in the water.

Unlike in the past, opening ceremonies were skipped at almost all public beaches. Instead civil servants concentrated their administrative capabilities on implementing the disinfection of beach facilities and other quarantine rules to minimize the risks of virus infections.

In Busan, a southeastern port city 450 kilometers southeast of Seoul, seven public beaches formally opened to the public on the day after two of them — Haeundae Beach and Songjeong Beach — were partially operational in June.

At Haeundae, one of the country’s most visited beaches, the number of parasols was reduced from 4,200 last year to 1,800 under the social distancing campaign, with each parasol numbered to track its users in case of epidemiological needs.

Haeundae Beach will suspend night swimming this year, which has been permitted since 2016.

The operator of Songjeong Beach also cut down the number of parasols from 1,050 to 450, while visitors to Imrang Beach and Ilgwang Beach are asked to set up private tents more than 2 meters apart.

Visitors to all the seven Busan beaches are required to get fever checks and offer personal details before renting parasols and other beach items. Public baths and shower booths have designated waiting lines with 2-meter intervals.

Perennial music and dance festivals and other events, which used to attract thousands of local and foreign spectators to beaches nationwide, will not be held this year.

The Busan International Rock Festival hosted by the port city annually and the Ulsan Shipbuilding & Sea Festival are among those festivals canceled.

The Boryeong Mud Festival held annually in summer at Daecheon Beach on the west coast will be scaled down into an online festival. 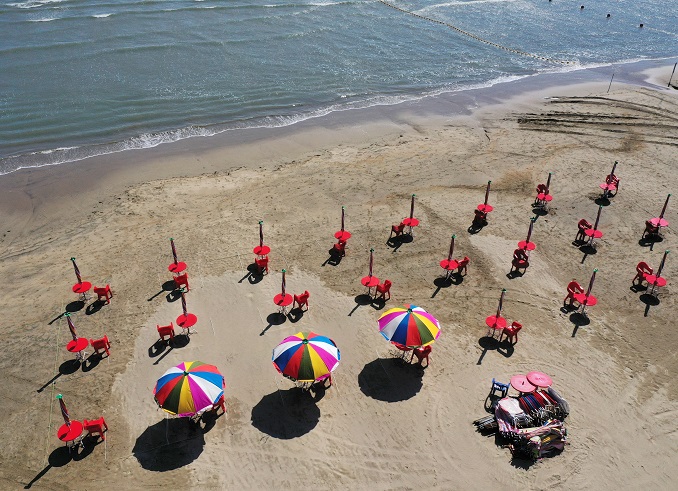 This photo, taken on June 30, 2020, shows parasols set up at a distance from one another at a beach in South Korea’s southeastern port city of Busan in the run-up to its opening to the public. (Yonhap)

Authorities already installed parasols, sun shelters and seasonal restaurant tables at 2-meter intervals at the 11 beaches and asked restaurant customers to sit in one direction without facing each other to minimize contact.

Night swimming will be banned at the Jeju beaches, except for the Iho Tewoo, Samyang and Hamdeok beaches that will remain open until 8 a.m. at the request of residents.

“I was surprised to see so many vacationers on the beach on a weekday morning. When the peak tourist season comes, it may be difficult to keep a distance from others,” said a Gyeonggi Province resident who visited Hyeopjae Beach with his family.

The resident, who identified himself as 41-year-old Kim, and other visitors confessed that it is very difficult to wear masks under the sun. Many vacationers were seen taking off their masks even before setting foot on the sand.

“I feel much warmer wearing a mask on my salty face after getting out of the water. Nevertheless, I keep wearing a mask because it is the rule,” said another tourist.

At some crowded beaches in Jeju, fever checks and personal information registration were not thoroughly enforced.

In other parts of the country, local authorities have devised a number of innovative measures to fight the coronavirus.

They include a reservation system for 14 beaches in the southwestern province of South Jeolla, mandatory fever checks and wrist bands for beach visitors, and the installation of signal lamps to show the degree of crowdedness.

“A larger number of vacationers than in the past are expected to visit beaches across the country this summer, as overseas travel is virtually impossible due to the spread of the coronavirus. The local government will do its utmost to stem the spread of the virus by taking thorough quarantine measures,” said an official at the South Chungcheong provincial government.