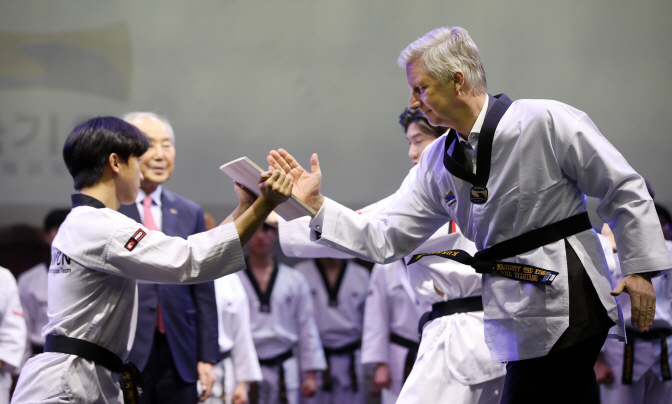 King Philippe was deeply impressed by the demonstration and thanked Kukkiwon for the honorary certificate. (Yonhap)

SEOUL, Mar. 28 (Korea Bizwire) — King Philippe of Belgium, who is on a state visit to South Korea, visited the World Taekwondo Headquarters, also known as Kukkiwon, on Wednesday.

King Philippe, along with Belgian government officials, watched a taekwondo performance. After that, the king changed into a taekwondo uniform and smashed a pine board to celebrate the visit to Kukkiwon.

Kim Young-tae, the acting head of Kukkiwon, presented King Philippe with an honorary certificate for taekwondo and asked for continued cooperation in promoting exchanges between the two countries and in expanding the base of taekwondo.

The king was deeply impressed by the demonstration and thanked Kukkiwon for the honorary certificate.

“There are many people training in taekwondo not only in Korea but also in Belgium. My son is one of them,” King Philippe said.

“My son is in Belgium, but he will be very jealous to learn that I have received a certificate of honor in Kukkiwon.”

The king also stressed his hope by saying “there will be a lot of exchanges between Korea and Belgium based on the visit.”