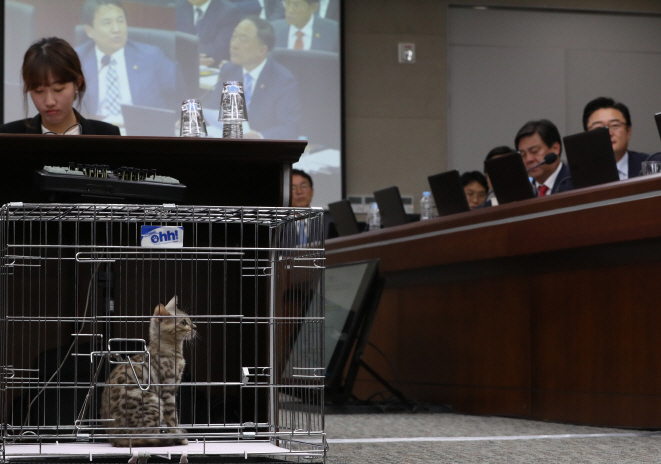 Netizens who heard of news of Rep. Kim Jin-tae’s inclusion of the cat at the hearings said they “felt sorry for the Bengal.” (image: Yonhap)

SEOUL, Oct. 11 (Korea Bizwire) — A Bengal cat appeared at a parliamentary inspection hearing carried out at the Government Complex in Sejong yesterday morning.

Rep. Kim Jin-tae of the Liberty Korea Party said he had brought the cat along with him because it “resembled the puma that had been killed after attempting to escape from a zoo in Daejeon” last month.

The lawmaker went onto say that the puma’s escape topped the list of Internet searches on the day coinciding with the summit meeting between the two Koreas.

Kim questioned whether the National Security Council (NSC) was called to a meeting to discuss the issue. “Just 1 hour and 35 minutes after the puma left its cage, an NSC meeting was held.

When a missile from North Korea was launched in May of last year, an NSC meeting was held 2 hours and 33 minutes after the launch,” said Kim, suggesting that the Blue House acted faster during the puma crisis compared to the North Korean missile launch.

However, Hong Nam-ki, Minister of Office for Government Policy Coordination denied the allegation. “The NSC meeting is not true. I know because I am a member of the Council,” said Hong.

“The puma is known for its mild nature, mildest of all the animals belonging to the cat species. Pumas would not kill or hurt zookeepers or visitors. All it did was exit the open cage,” said Kim.

“The puma was killed because the tranquilizer gun did not work. Don’t you feel sorry for the animal?” asked the lawmaker, who also pointed out that Prime Minister Lee Nak-yeon’s posts on Facebook regarding the incident that day were “frivolous.”

In response, Hong said that the escaped puma posed a threat to residents in the area.

“If the puma had endangered the lives of citizens, the government would have been highly criticized,” said Hong, who claimed that the decision to kill the puma was made in agreement with zoo officials.

Meanwhile, Kim said that he had been taking care of the Bengal cat for days prior, feeding it chicken breast and tuna. Netizens who heard of news of Kim’s inclusion of the cat at the hearings said they “felt sorry for the Bengal.”

During the afternoon session of the hearings, Rep. Kim Byung-wook of the Democratic Party said that the cat seemed “very insecure and was looking in all directions, shaking in fear.”

Kim said that fellow lawmaker Kim Jin-tae’s question regarding the puma were asked to raise the topic of animal abuse.

“But isn’t bringing a cat inside a cage animal abuse as well?” asked Kim, who went on to request that animals be banned from the hearings in the future.