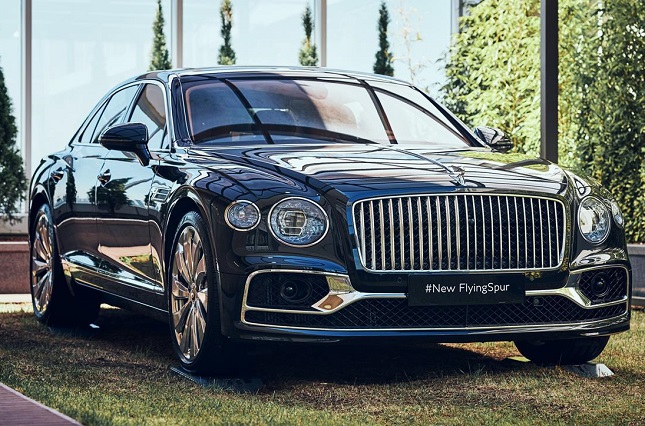 This photo taken on Oct. 8, 2020 shows the FlyingSpur luxury sedan to be released in South Korea early next year. (Yonhap)

Bentley Motors Korea said it plans to launch the FlyingSpur V8 luxury sedan and the facelifted Bentayga V8 sport-utility vehicle in the Korean market next year to boost its sales in Asia’s fourth-biggest economy.

“We have received 180 preorders (for the FlyingSpur V8 in South Korea) even before its global launch (from December). Korea is one of the very early countries for FlyingSpur delivery and delivery to Korea will start early next year,” he said.

The FlyingSpur V8 luxury sedan is expected to carry a price tag of 320 million won (about US$280,000) in South Korea. Further details about the model will be released later.

The Continental GT V8 sports coupe is the only Bentley model available in the South Korean market as of October. The Bentayga V8 model for the year has been sold out, the company said.

Receiving hundreds of preorders for the FlyingSpur V8 model is a strong indication that Bentley is set to report robust sales for the next few years, the executive said.

From January to September, Bentley sold a total of 213 vehicles in South Korea, nearly tripling from 73 in the year-ago period, according to the Korea Automobile Importers and Distributors Association.

Bentley belongs to Audi-Volkswagen Korea, which also sells vehicles under the Audi, Volkswagen and Lamborghini brands.