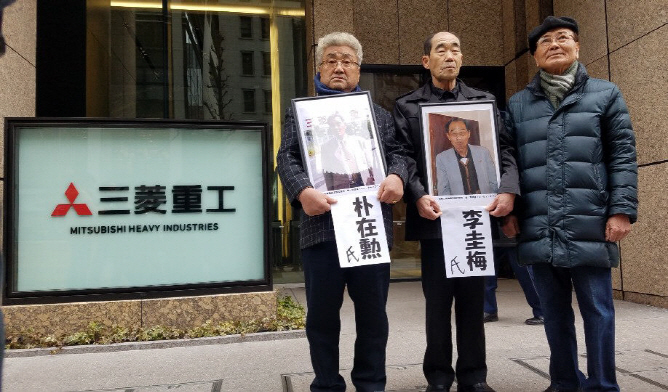 Three bereaved families of Korean plaintiffs — (from L to R) Park Jae-hoon, Lee Kyu-mae and Oh Chul-seok — protest in front of the head office of the head office of Mitsubishi Heavy Industries Ltd. in Tokyo on Feb. 15, 2019, to urge the company to honor court rulings that ordered it to compensate Koreans for forced labor during World War II. (Yonhap)

In November last year, South Korea’s Supreme Court upheld two rulings — one that ordered Mitsubishi to award 100-120 million won (US$89,000-109,000) each to four women and a victim’s family member, and the other that ordered the company to pay 80 million won each to six other South Koreans for their unpaid labor.

Along with the plaintiffs’ lawyer, Choi Bong-tae, the three bereaved families, of victims Park Jae-hoon, Lee Kyu-mae and Oh Chul-seok, tried to meet with officials of the company to press for negotiations to secure the compensation.

The bereaved families were joined by Japanese activists, including Makoto Takahashi, co-leader of an organization supporting civil suits against Mitsubishi Nagoya by forcibly conscripted female workers, and Hideki Yano, secretary-general of the National Network for Forced Labor and Trials to Hold Companies Responsible.

Their visit came after lawyers of the plaintiffs delivered a letter on Dec. 18 to ask the company to agree to hold talks and express their plan to begin the process of liquidating its seized assets if it fails to respond to their request by the end of February.

Takahashi managed to hold a meeting with a Mitsubishi official for 30 minutes in which he gave the company a letter reiterating that the plaintiffs will take action to liquidate its seized assets if it fails to answer their request for negotiations to honor the court’s ruling.

“We stressed that Mitsubishi should comply with the court rulings as a company representing Japan,” Takahashi told reporters after the meeting. “We will make the case known worldwide if they do not respond to it properly.”

The Mitsubishi official was quoted as saying that the company’s senior officials had said they would not meet with the people and lawyers from South Korea and he will report to them about the meeting he had with Takahashi.

Takahashi indicated strongly that the plaintiffs will begin the process of liquidating its seized assets on March 1.

Two lawyers for South Korean plaintiffs made a visit to the head office of Japanese steelmaker Nippon Steel & Sumitomo Metal Corp. to call on them to hold negotiations over a similar court ruling in favor of Korean victims of wartime forced labor.

In October, the top court upheld a lower court ruling that ordered the steelmaker to compensate four South Koreans for forced labor during Japan’s 1910-45 colonial rule of the Korean Peninsula.

But officials at the company who are responsible for the issue refused to meet with them for the third time, also having done so in November and December.

After visiting the company, Lim Jae-sung, one of the two lawyers, rapped the steelmaker for failing to respond to the court ruling as “it stands behind the Japanese government, which says the court judgment should be rejected.”

Lim said he will take measures to begin liquidating the company’s seized assets after he returns to South Korea.

It would take three months to liquidate shares, which the steelmaker holds in a joint company in Seoul, Lim said. A South Korean court has approved a request by the plaintiffs to seize Korean assets of the steelmaker over Tokyo’s wartime forced labor.

“I think we are giving them the last chance to offer an apology and negotiate with us,” Lim.

The South Korean top court has ruled that the 1965 treaty signed between South Korea and Japan to settle colonial-era issues does not terminate individuals’ rights to claim damages.

Korea was under Japan’s brutal colonial rule from 1910-45. South Korea says Japanese leaders do not sincerely repent for the past wrongdoings and refuse to take full legal responsibility. Japan claims all reparation issues have been settled in the treaty that normalized their diplomatic ties.