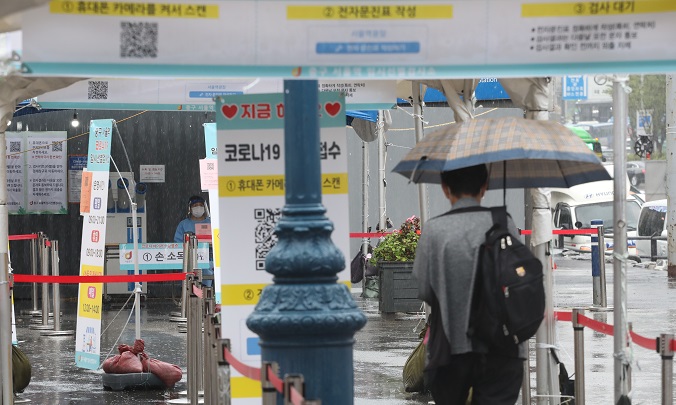 A person waits to take a virus test while holding an umbrella at a screening center in Seoul Station, downtown Seoul, on Sept. 29, 2021. (Yonhap)

SEOUL, Sept. 29 (Korea Bizwire) — South Korea’s daily coronavirus cases stayed in the 2,000s for a fourth day Wednesday, bouncing back to the second largest since the outbreak of COVID-19 in January last year on a spike in infections in the greater Seoul area.

The country reported 2,885 new COVID-19 cases, including 2,859 local infections, bringing the total caseload to 308,725, according to the Korea Disease Control and Prevention Agency (KDCA).

The daily caseload touched a fresh high of 3,272 on Saturday due to a mass migration during the Chuseok holiday, the Korean autumn harvest celebration, which ran from Monday to Wednesday last week.

Of the locally transmitted cases, the Seoul metropolitan area, home to half of the nation’s 52 million population, took up 76.6 percent of the total, which is up 2.6 percentage points from the previous day.

As of 9 p.m., the country had reported 2,244 additional cases nationwide for the day, down 415 cases from the same time a day earlier, according to health authorities and municipalities. The daily tally is counted until midnight and announced the following morning.

After the Chuseok holiday, more infections were reported outside of the greater Seoul area. Daegu, a city 302 kilometers southeast of Seoul reported 109 cases, with North Gyeongsang Province, which surrounds Daegu, reporting 88 cases.

The recent spike in newly confirmed cases touched off worries over a possible shortage in hospital beds for seriously ill patients.

Daily cases have stayed over 1,000 for the last 85 days despite the country having implemented the toughest virus curbs to slow down the nationwide spread.

The country added 10 more deaths from COVID-19, raising the death toll to 2,474. Health authorities still remained jittery over a potential surge in new cases, as the upcoming extended holidays next month are forecast to fuel further spread of the virus. 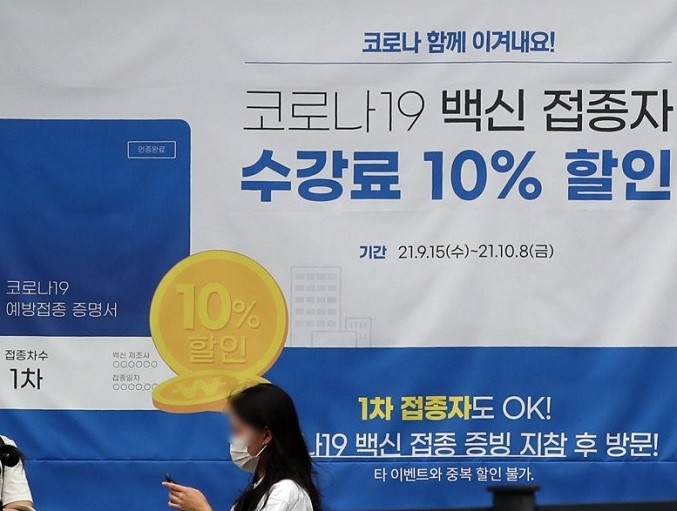 A banner informing of a 10 percent off tuition fee for vaccinated people is put up at a private educational institute in western Seoul on Sept. 28, 2021. (Yonhap)

Health authorities warned the peak of the fourth wave of the pandemic has yet to come. “It is difficult to predict whether the virus curve will flatten or not, but it is certain new cases will increase down the road.”

The authorities said an increase in movement on fall foliage trips may further fuel the virus spread, advising people to be cautious about infections.

The reproduction rate, which refers to the number of people a single patient can infect, moved up in the period from Sept. 19-25 to 1.04, from 1.03 a week earlier.

If the upward trends continue, the current distancing rules will be maintained for a couple of weeks.

The greater Seoul area has been under Level 4 distancing measures, the highest in the country’s four-tier system, since July, with most other areas being under Level 3. The health authorities will decide whether to extend the current distancing rules or not Friday.

Breakthrough infections, which refer to those who tested positive even after being fully vaccinated, had reached 7,772 as of Sept. 19 after the launch of the country’s vaccination program in late February, with 43.8 of every 100,000 fully vaccinated people reported as newly confirmed cases.

Imported cases came to 26, including three from Vietnam.

The number of patients with serious symptoms across the country reached 331, up seven from the previous day.

The total number of people released from quarantine after making full recoveries was 272,724, up 1,796 from a day earlier.