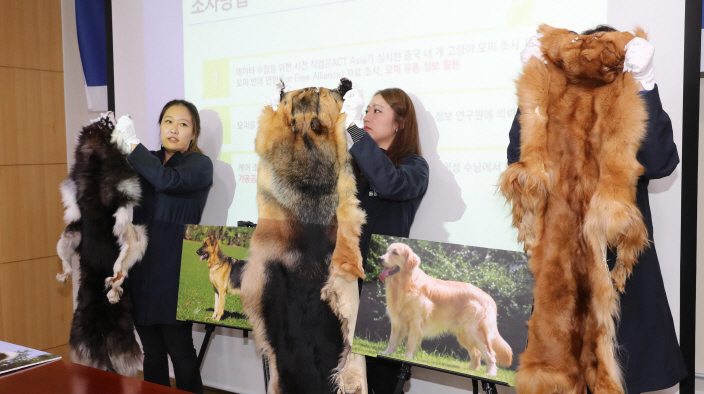 Animal activists held a press conference yesterday at the National Assembly and stated that fur products made from cat hide are probably coming from China as current domestic laws prohibit slaughtering of cats. (image: Yonhap)

SEOUL, Nov. 16 (Korea Bizwire) — Animal activists are calling for a new law that would ban imports of fur products made from cats and dogs.

CARE, a leading animal activist group, held a press conference yesterday at the National Assembly and stated that fur products made from cat hide are probably coming from China as current domestic laws prohibit slaughtering of cats.

CARE purchased eight samples of fur products such as accessories and key chains that were decorated with fur.

The samples were then sent off for DNA testing at the Korea Institute of Genetic Information. DNA testing results showed that two key chains and one cat toy contained cat DNA.

Regarding the findings, CARE stated that 75 percent of the world’s fur products are produced in China.

“Because China lacks animal protection laws, it’s hard to punish the animal abuse that occurs in its fur production factories,” noted a spokesperson.

CARE went onto say that Korean consumers end up purchasing such products without knowing that hides were removed from cats and dogs in such inhumane methods to produce the products.

“According to our Chinese research team, the number of animals that are currently being distributed to be turned into fur products is in the hundreds of millions,” said a spokesperson for CARE, who added that banning imports of fur products made from cats and animals could significantly decrease their production.

Earlier in the morning on the same day, a separate animal activist group, Korea Animal Rights Advocates, held a press conference at Gwanghwamun Plaza and called for a ban on fur products in South Korea, one of the largest import nations of fur products along with Russia and China.

“Minks and raccoons are being tortured for their fur,” said one official from the Korea Animal Rights Advocates.

“Factories that produce fur products belong to an industry that abuse animals through total suppression of the wildness of the animals.”