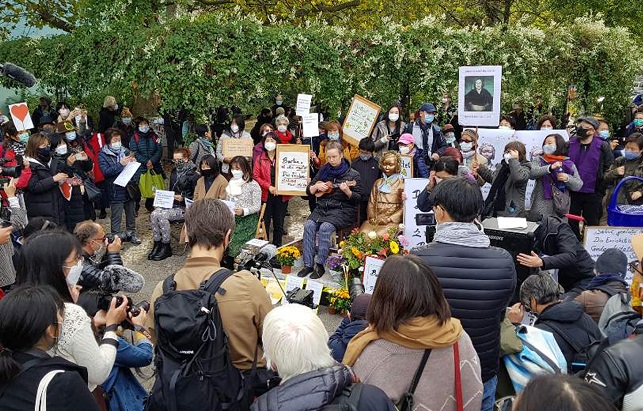 The council of Mitte Borough, a central Berlin district, voted overwhelmingly in favor of the resolution in a plenary session on Thursday, calling for the retention of the “Statue of Peace,” they said.

The resolution, passed in a 28-9 vote, states that the Statue of Peace is productively contributing to the discussion on sexual violence against women in armed conflicts.

Experts in Seoul said the resolution has heightened the possibility of the statue remaining in central Berlin until its expiry date of Aug. 14, 2021, while paving the ground for its permanent installation there.

The latest development came after the Mitte borough office decided in mid-October to withhold its earlier order to remove the statue following protests from activists and citizens.

The Mitte district office said at that time that its removal order was no longer applicable due to an injunction filed by local civic group Korea Verband, which brands itself as a platform for all who are interested in Korea.

Korea Verband and its supporters set up the statue in a public place in the Mitte district on Sept. 25 to internationally publicize the issue of wartime sexual slavery victims.

Twelve days after its unveiling ceremony, however, the Mitte district office had ordered Korea Verband to remove the statue by Oct. 14 after the Japanese government expressed regrets over its installation.

The statue symbolizes 200,000 Asian women, mostly Koreans, who were forcibly sent to front-line brothels to work as sex slaves for Japanese troops during World War II.

Similar statues have been erected in several countries around the world, including in front of the former Japanese Embassy building in Seoul and at five locations across the United States.

The Statue of Peace is the third comfort women statue installed in Germany and the first to stand in a public place with approval from the Berlin authorities. The other two statues are erected on private properties.