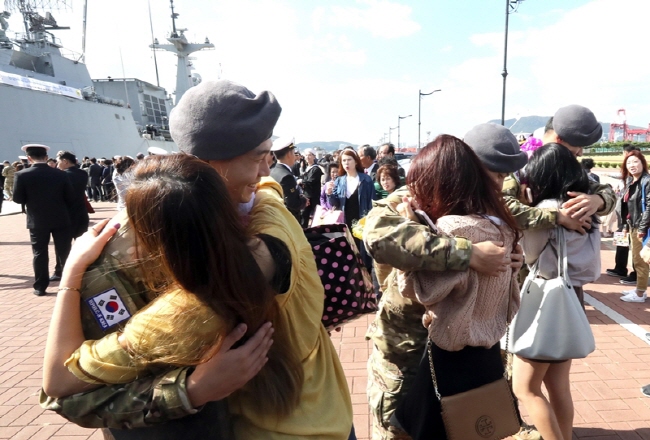 13.7 percent of soldiers said they first think of their loving family and girlfriend when they see the first snow of the year. (Yonhap)

SEOUL, Nov. 28 (Korea Bizwire) — The first thing that pops up in the minds of South Korean soldiers at the sight of the first snow, contrary to popular belief, wasn’t the idea of having to clean up the snow.

The Korea Defense Daily, a newspaper published by the Ministry of Defense, conducted a survey of 482 soldiers asking them about what pops up in their mind when they see the first snow of the year.

Among respondents, 13.7 percent said they first think of their loving family and girlfriend, sweet potatoes and other winter snacks (12.7 percent), and snow-removing work and winter training (12.2 percent).

“It is exciting to see the first snow, but I am also worried about the safety of my family and my girlfriend,” said PFC Yu Hwan-min of the Capital Defense Command.

“The snow reminds me of warm ‘carp bread’ and a cup of hot fish cake soup,” said SrA Yu Yeong-sang of the Republic of Korea Air Force 16th Fighter Wing.

Snow-removal operations and winter training, originally expected to top the charts, remained in third place, thanks to the introduction of snow-removal vehicles and outsourcing.

“As recently as last year, we had to go out there and use our shovels to get rid of the snow,” said Sgt. Han Chang-hwan of the Republic of Korea Army 7th Infantry Division.

“The introduction of vehicles and outsourcing work to private businesses has definitely helped reduce the burden on the military.”