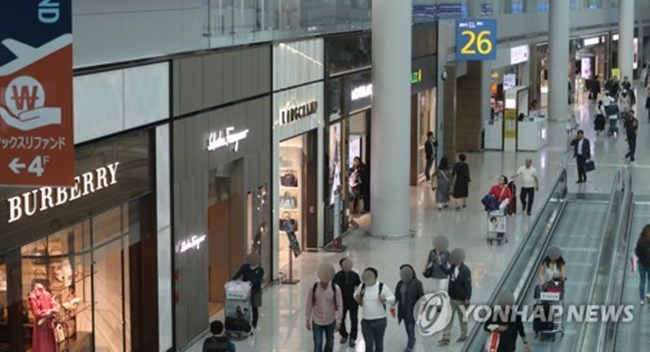 Tourists at a zone for duty-free shops at Incheon International Airport, west of Seoul, on March 30, 2018. (Image: Yonhap)

SEOUL, April 13 (Korea Bizwire) – The operator of Incheon International Airport put up a notice of tender for the licenses to run duty-free shops at South Korea’s main gateway on Friday, it said, after retail giant Lotte decided to pull out following a plunge in the number of Chinese tourists.

The business rights will be valid for five years, with the launch of operation planned for July, according to Incheon International Airport Corp. (IIAC).

The bidding took place as No. 1 industry player Lotte Duty Free decided to return three of its four money-losing concessions to the airport in the face of a sharp drop in sales amid a plunge in the number of tourists.

IIAC said it has reorganized the three zones to two for bidding.

South Korea’s leading retailers, including Hotel Shilla and Shinsegae, are expected to bid.

Industry watchers are also keeping an eye on whether Lotte will apply again for the licenses as the airport operator has loosened the criteria for application.

“We will consult with the customs office and try to wrap up the bidding process by mid-June at the latest, and make sure the new operator will be able to begin business in early July,” an IIAC official said.