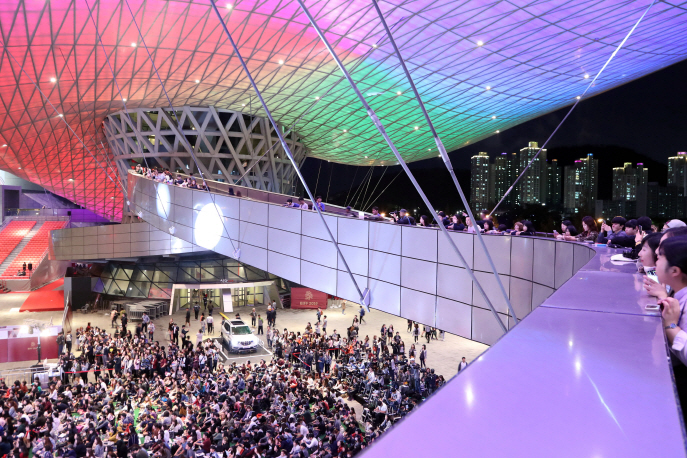 The 23rd edition of the festival will run from Oct. 4-13 and will feature 324 films from 79 countries around the world. (image: Yonhap)

BUSAN, Oct. 2 (Korea Bizwire) — The Busan International Film Festival will jointly open this year’s event with the Busan metropolitan government and the Korean film industry on Thursday in a show of unity after nearly four years of political feuding over artistic freedom.

The three parties will be represented by Busan Mayor Oh Keo-don, chairman of the festival’s board of directors Lee Yong-kwan and a figure representing the industry, the festival authority said Tuesday. Discussions are under way concerning who the third person will be, it added.

This is the first time that the top sponsoring city, the festival and the film industry have jointly opened the annual event. Before 2016, when the festival became a corporate body, the Busan mayor, who chairs the festival’s organizing committee, had declared it open every year.

The festival has been in dispute with the Busan authorities since it screened a documentary about the Sewol ferry disaster despite opposition from the local government in October 2014. Titled “The Truth Shall Not Sink With the Sewol” and also known as “Diving Bell,” the film criticized the former Park Geun-hye administration’s handling of a ferry sinking that claimed more than 300 lives, mostly teenage students, in April that year.

The Busan government under the Park administration subsequently took what film industry people called “retaliatory measures,” including an unprecedented audit into the festival’s executive members and significant funding cuts. The status of the festival subsequently nosedived when Korean film industry groups boycotted the event.

But the dispute was settled after Lee and former deputy festival director Jay Jeon were reinstated for this year’s edition after being removed from their posts and the new liberal government of President Moon Jae-in vowed its support for the festival.

The local government has also vowed to render its full support so BIFF can regain its status as Asia’s premier film festival this year.

The 23rd edition of the festival will run from Oct. 4-13 and will feature 324 films from 79 countries around the world.