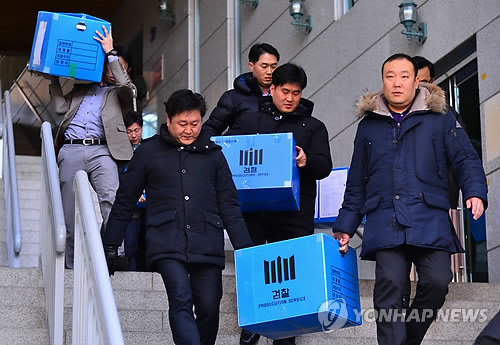 Lee Kyu-tae, the 66-year-old chairman of Ilgwang Gongyeong, was detained on charges of inflating the price of the Electronic Warfare Training System (EWTS) for the Air Force and creating a slush fund, according to a pan-governmental task force on corruption in the defense industry.

“Lee is suspected of defrauding the government by playing a leading role in providing sub-standard parts for the equipment,” said a task force official.

At the time of the system’s introduction, there had been a controversy that EWTS failed to meet the military’s requirement and fit the country’s security circumstances.

The training platform provides a realistic representation of threats through a wide variety of instructor-generated scenarios to improve pilots’ ability to survive.

As part of the probe, state investigators also raided the company’s headquarters, branch offices and Lee’s residence in Seoul earlier in the day, and confiscated the company’s classified documents, computer hard disks and account records.

Lee, who founded the defense firm in the mid-1980s, has worked as an arms dealer for more than 30 years. He was arrested in 2009 on embezzlement charges while being involved in the country’s weapons purchase from Russia.

Lee’s detention is part of the task force’s massive investigation into multiple corruption scandals in the defense industry since November last year.

Jung Ok-geun, who served as the Navy Chief of Staff from 2008 to 2010, was indicted for taking 60 million won from a company that brokers sales of German-made communications equipment in 2009, and a handful of former and active-duty officers have been under investigation for alleged graft related to the country’s indigenous salvage ship project.