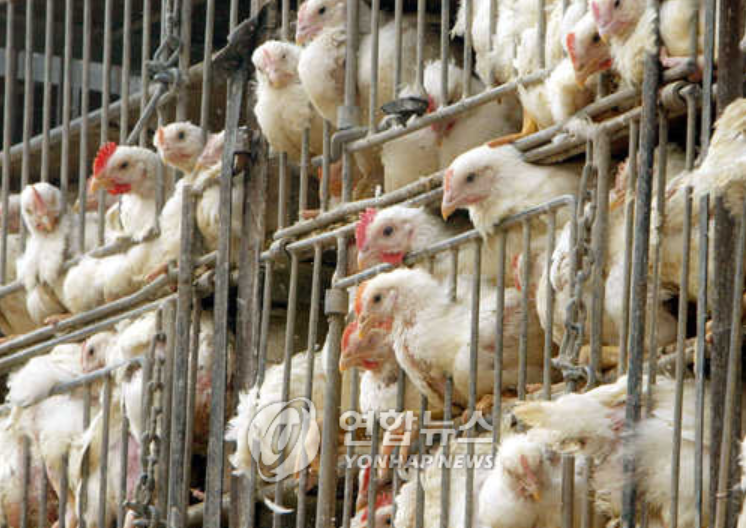 The government’s recent move to encourage bigger cages in order to prevent another avian influenza from spreading on a massive scale like the one which transpired last November is being met with a lukewarm reception and skepticism among critics over the lax nature of the newly introduced rules. (Image courtesy of Yonhap)

SEOUL, April 17 (Korea Bizwire) – Despite new government measures that require farmers to make use of larger cages, the horrific conditions that poultry live under at typical factory farms in South Korea are unlikely to change soon, which have been identified as one of the major factors behind the recent influenza Type A pandemic that causes illness to people.

The government’s recent move to encourage bigger cages in order to prevent another avian influenza from spreading on a massive scale like the one which transpired last November is being met with a lukewarm reception and skepticism among critics over the lax nature of the newly introduced rules.

Existing poultry farms will have 10 years to update their old cages in accordance with the new standards, but critics say the grace period is too long, and that simply making cages slightly bigger won’t get to the root of the problem.

According to current laws regarding poultry farming, chickens are being raised in a space smaller the size of an A4 sheet of paper (0.05 square meters or 0.5 square feet), which means 1 square meter per 20 chickens. When the new rules take place, poultry farms will be required to have their cages built at least 0.075 square meters in size.

The EU already banned (in 2003) the construction of any more of the so-called battery cages, a term that refers to small wire cages in which hens spend their entire lives with little to no space to move around. Since a total ban on battery cages took place in 2012, an increasing number of farmers have adopted free-range farming.

South Korean poultry farms however, have been bucking the trend and engaging in activities that border on animal cruelty, such as keeping the lights on during the night to maximize egg production, exploiting a physiological phenomenon in which a drastic environmental change suddenly increases the egg production of hens.

Despite opposition from animal rights groups, little has been done to secure the wellbeing of farm animals in South Korea.

A representative from the Korea Association for Animal Protection (KAAP), Lee Won-bok, was critical of the government’s move to tackle avian influenza, calling it a ‘makeshift plan’ that will bring little to no change.

“AI pandemics occur almost every year due to the poor living conditions of farm animals, not because of the size of cages,” Lee said.