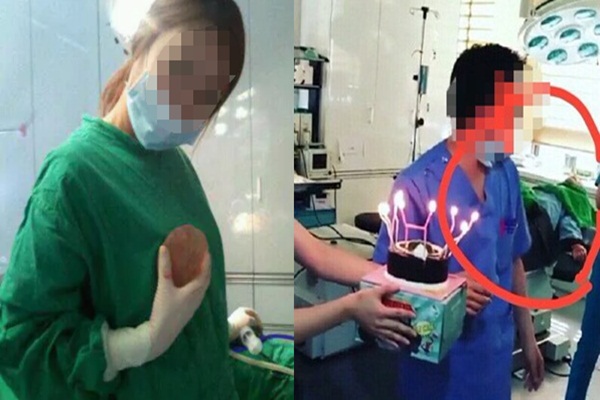 SEOUL, Dec. 29 (Korea Bizwire) – Several photos showing nurses having a birthday party at a plastic surgery clinic while a patient was on the operating table have hit Korean Internet communities, and raised questions about the morality of Korean medical clinics.

On December 28, the photos were revealed when a nurse from a plastic surgery clinic in Seoul’s Gangnam district posted them online. The controversial photos depicted clinic staff carrying a candle-lit birthday cake, taking selfies during the operation, eating food in the operating room, playing with breast implants, and counting money. Some photos showed patients lying on the operating table.

As the photos showed the operating surgeons, with some even looking at the camera, it seemed that even the doctors did not object to the nurses’ behavior. Under the photos, the nurse commented, “selfie,” “director of our clinic,” or “during operation.”

Although the nurse deleted her postings after they were widely publicized, the photos are spreading rapidly as other individuals downloaded the originals and are now sharing them.

Moreover, as a university student recently died during a plastic surgery procedure, there is increasing concern over patient safety.

On December 19, the 21-year-old university student who was undergoing a 4-hour facial bone contouring surgical procedure, failed to regain consciousness in the recovery room following the operation, and died during treatment.

Meanwhile, the clinicians’ irresponsible conduct has tarnished their reputation in medical circles. In October last year, a surgeon at a university hospital in Seoul left the operation room after debating heart surgery procedures for a 4-month old baby. For his careless actions, the doctor was suspended for a month.

After looking at the photos, Korean Internet users showed their fury by saying, “They are not abiding by the basic rules as clinicians” and “They only see patients as money.”