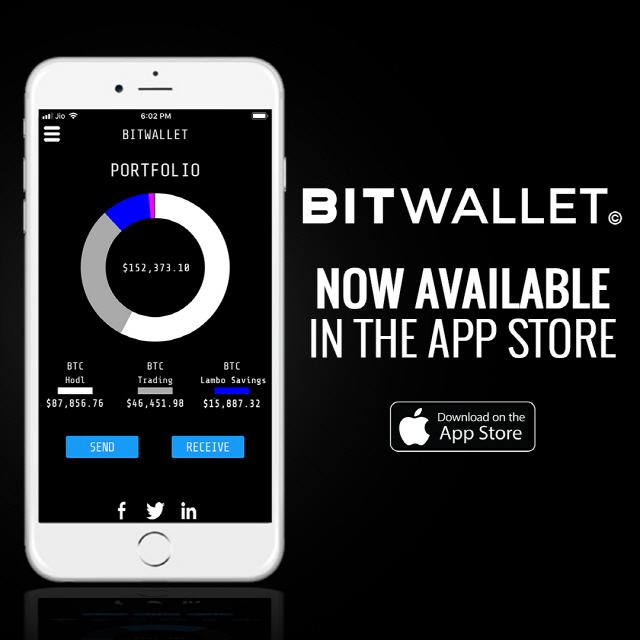 HOUSTON, Apr. 9 (Korea Bizwire) — Today, the BitWallet company launches a powerful new cryptocurrency wallet for Apple devices, which now make cryptocurrency transactions possible to anyone with an iPhone or iPad.  Available on the AppStore, it enables customers to store, send, and receive Bitcoin as well as other major ‘altcoins’.

A hit with consumers, BitWallet’s simple design offers a much-needed entryway for everyday people to start using cryptocurrency. “Most crypto apps are confusing for new users. We designed BitWallet to be simple enough for anyone to use, which solves a big problem in our industry,” said John T. Perrone, President and CEO of BitWallet, Incorporated.

BitWallet utilizes blockchain technology to allow users to instantly transfer any amount of digital currency to anywhere in the world, for little to no fees. Though digital transactions are relatively new to consumers, BitWallet has big plans to make commercial cryptocurrency transactions as common as credit card purchases. The big difference: BitWallet will allow businesses to accept payments for nearly a third of the fee that credit cards charge.

The world watched as Bitcoin grew from just pennies eight years ago to almost $20,000 per coin in early 2018. The global currency has since stabilized in price at approximately $4,000 per Bitcoin with a total market cap of over $70 billion. Market cap for all cryptocurrencies combined totals more than $120 billion.

Bitcoin enjoyed a big year in 2018 as Wall Street and other traditional financial institutions invested significant resources in digital currency.  The future of digital currency is only improving as financial industry giants like J.P. Morgan, Goldman Sachs, and the New York Stock Exchange enter the space. Impending regulation will bring into focus the scope of cryptocurrency transactions, and it is expected to foster a breakthrough for digital commerce throughout the world.

The BitWallet application will support a long list of altcoins along with a cryptocurrency trading feature. The company also expects to develop a mapping technology to connect consumers to businesses that accept digital currency. BitWallet Incorporated’s headquarters and principal operations are located in Houston, Texas.

A photo accompanying this announcement is available at http://www.globenewswire.com/NewsRoom/AttachmentNg/17bc38c2-e18b-47f3-95fc-9ee5f1389d83