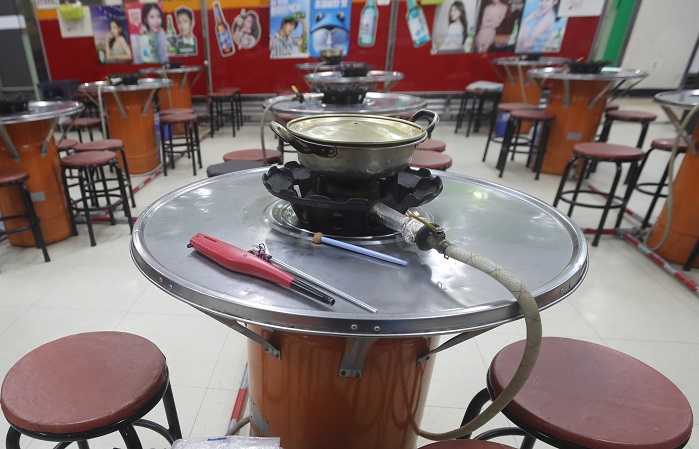 Four chairs are arranged around each table at a restaurant in Seoul, in this file photo taken Dec. 17, 2021, one day before South Korea will start to implement tight social distancing and other virus curbs to contain the fast spread of the new coronavirus, including the reduction of the maximum size of private gatherings to four people nationwide and the restoration of a 9 p.m. curfew on restaurant and cafe business hours. (Yonhap)

The report suggests that easing a curfew on business operations while imposing a stricter ceiling on the number of people at private gatherings could be more conducive to consumption than the current measures at a time when the government has been seeking to find an optimal policy mix of minimizing damage to pandemic-hit small merchants, while remaining vigilant against COVID-19.

In the face of a resurgence of infections and growing worries over the omicron variant, the government has maintained a 9 p.m. curfew on cafes and restaurants but raised the ceiling on the number of gatherings from four to six since mid-January.

“Our analysis shows that restrictions on business operation hours that have been applied to such stores as restaurants have led to the largest decline in the consumption of in-person services,” according to the report of the Bank of Korea (BOK) obtained by Yonhap News Agency.

“Over the third and fourth waves of the pandemic, restrictions on operation hours caused consumption of in-person services to drop 48 percent, while the consumption shrank 38 percent over the same period due to ceilings imposed on private gatherings,” the report showed.

Toughening rules on bars, karaoke businesses and other entertainment facilities have led to an 8 percent decline in consumption, the report showed.

The report is based on the BOK’s analysis of private consumption, including credit card spending data in January and August last year, when the country was in the middle of the third and fourth waves of the pandemic.

It, however, did not mention the impact that tighter rules on private gatherings and other antivirus measures had on keeping a lid on the spread of the coronavirus.

Whenever faced with a resurgence of infections, health authorities have adjusted such social distancing rules.

Raising the ceiling on the number of private gatherings and imposing a tougher curfew on business operations have served as major tools for the government’s antivirus fight.

The government, however, has struggled to enforce the best policy mix that guarantees blocking the further spread of the virus, while easing the suffering of small stores most exposed to fewer operating hours and consumers venturing out amid the pandemic. 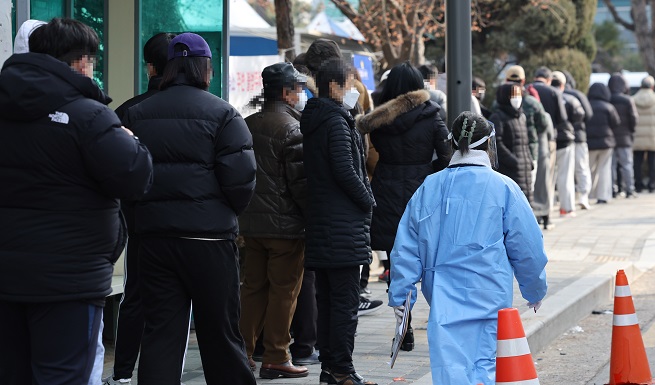 People wait in line to receive COVID-19 tests in Seoul on Jan. 23, 2022, as South Korea’s daily coronavirus cases spiked to the second-largest figure since the pandemic began amid the fast spread of the omicron variant. (Yonhap)

Buoyed by high vaccination rates, the government once experimented with a scheme of returning the country back to normal under its “living with COVID-19″ drive that began in early November, but reaching nearly 8,000 daily cases of infections forced it to suspend the scheme and return to tougher social distancing rules.

The government has since maintained a 9 p.m. curfew on restaurants and cafes while allowing up to six people to gather at cafes and restaurants, up from the previous four. The revised social distancing rules will be in place until Feb. 6.

Despite the adjustments to social distancing curbs, daily infections have not shown signs of letting up. On Sunday, South Korea reported 7,630 new cases of COVID-19, the second highest since the virus hit the country in early 2020.

Watchers say that the BOK’s recent report indicates the government could adjust social distancing rules by maintaining a tougher ceiling on private gatherings while at the same time easing business hour restrictions as it could bolster private consumption without disrupting antivirus efforts.

Meanwhile, the BOK report showed people reduce their in-person spending when the government tightens social distancing rules but the restrictive impact tends to steadily peter out one or 1 1/2 months later on average as they appear to adapt to the situation.

The report also predicted that the reimposition of tighter social distancing rules since mid-December would cause private consumption to slow to some extent during the first quarter of this year, but it will likely rebound after it bottoms out in mid-January.

“Assuming that the (current) toughened antivirus rules will remain until late February, private consumption is projected to grow in the 3.5-3.7 percent range this year, though it depends on whether the government draws up an extra budget,” the report said.

The projection is in line with the BOK’s earlier forecast of a 3.6 percent increase in private consumption in its report on the economic outlook in November, just before the omicron variant was first reported in the country.

The report appears to have been compiled before the government drew up an extra budget of 14 trillion won (US$11.8 billion) on Friday to support small merchants hit hard by the COVID-19 pandemic amid extended virus curbs.

The BOK will announce its updated economic outlooks, including private spending projections, on Feb. 24 when it holds a rate-setting meeting.